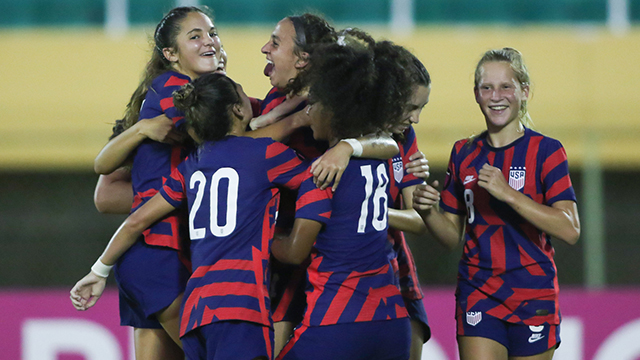 The U.S. Under-17 WNT is heading to this year's World Cup.

Two goals from PDA forward Melina Rebimbas and a 78th minute strike from Onyeka Gamero (Beach FC) highlighted a dominant, 3-0 win against Canada in Friday's semifinal at the Concacaf Championship.

The U.S. squad continued to impress under head coach Natalia Astrain, demonstrating an impressive capacity to control possession and the game state. Eighteen minutes into the first half, Nicollette Kiorpes picked out Rebimbas, who turned and fired to put the U.S. up a goal.

From there, the U.S. looked comfortable, keeping the ball for long portions of the first half. However, the Canadian back line did well to thwart Gamero, Rebimbas and Kiorpes from extending the lead before the break.

Rebimbas doubled the lead in the 58th minute, playing a savvy one-two in the penalty box with Lauren Martinho. Several impressive save from Canadian goalkeeper Coralie Lallier kept Canada within reach, but Gamero finally found a way past her with 12 minutes to go. After a layoff from Amalia Villarreal, Gamero lashed a left-footed shot to the far post, extending the lead further.

It capped another impressive effort by the U.S. squad, outshooting the Canadians by a 29-3 margin.

The win secures a spot for the United States at this year's U17 World Cup in India. On Sunday, May 8 they'll face Mexico for the Concacaf Championship at 5 p.m.