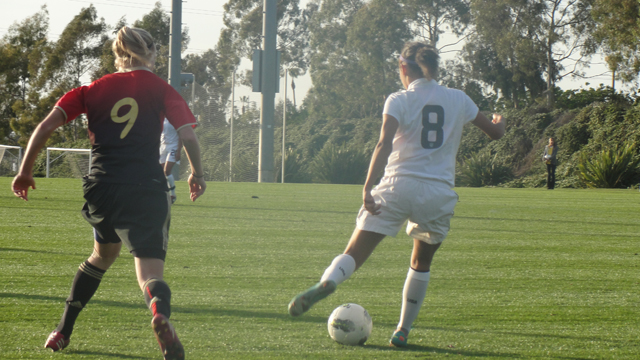 Under the guidance of newly appointed head coach B.J. Snow, the U.S. U17 WNT nabbed a late equalizer off the foot of Kaycie Tillman to earn a draw against a very good Germany side that is preparing for upcoming competitions in Europe. 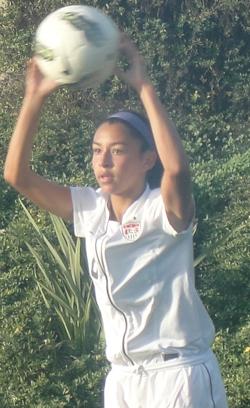 “Very, very pleased with the performance,” Snow told TopDrawerSoccer.com after the game. “We went into it talking about executing what we have been talking about in basically three practices. We have been together for a day and a half. And to play a team in Germany that has been together a long time with a bunch of 96s – what a great opportunity for our girls to go out and perform.”

The difference in physicality and experience showed during the opening half where the visitors registered one more shot (5-4) and had the better looks on goal. Snow chalked it up to heavy legs and the fact that this was the first international game for every player on his team while Germany had players registering their 12th appearance on the international stage.

However, the teams went into the break on level terms thanks to two saves from U.S. goalkeeper Katherine Hess and a solid outing from the U.S. back four.

Germany found its breakthrough in the second half when substitute Alina Ortega Jurado cleaned up a deflected cross in the 55th minute. Jurado’s finish was well placed into the lower corner, which left Hess with no chance at making a save.

The goal was against the run of play, as the U.S. had been the better side to start the second half thanks to the introduction of Tillman and Katie Pingel to the game. The duo brought some electricity off the bench and started to spread the Germany defense.

Tillman provided the best chance for the U.S. to grab the opener when she beat her mark about 25 yards from goal after a long ball was played into the striker. The Dallas Sting star then tried to get a shot off but was nudged off balance by a defender. Jennifer Westendorf saw the play developing and charged through the box to get to the ball before the goalkeeper. Westendorf’s shot looked headed for the back of the net until a defender made a last ditch sliding challenge to clear it for a corner kick.

After Jurado’s goal, Germany reasserted its control of the fixture and should have put the game away late on two separate occasions. Jurado had the first look in the 86th minute when she was once again left open inside the box after making a late run. She missed the target completely this time though.

Two minutes later, a diagonal ball behind the U.S. defense looked like it was going to cause trouble, but Hess was off her line with authority and shut down the goal scoring opportunity.

The U.S. made its older visitors pay for the mistakes when Pingel and Tillman linked up for the game-tying goal with only two minutes left in the fixture. Pingel zipped the ball into Tillman’s feet. The striker managed to turn and get off a shot with a defender on her back.

“It was really amazing to score against a good team like Germany,” Tillman told TopDrawerSoccer.com after the game. “I looked up and placed it. I am just really glad it went in.”

Overall, Snow and the U.S. coaching staff had plenty to be pleased about in their debuts on the international stage.

“I think the things we have been able to practice over the last two days, the girls executed far past my expectation,” Snow said. “Certainly, we are getting a picture of the things we need to continue to build on, but as far as being able to possess and move the ball – it was positive. I thought our back four was fantastic today. And our movement was better in the second half after we got our legs underneath us.”

Center backs Alana Cook, who was the captain for the game, and Michaela Abam had solid outings against the talented German side. Abam played the final 30 minutes at center midfielder where she showed off her ability to get stuck on the challenge and disrupt the rhythm of Germany’s midfield. Kate Morris did well alongside Cook at CB when Abam moved up.

Outside backs Ellie Jean and Tegan McGrady both went the full 90 minutes, as they were excellent on the day.