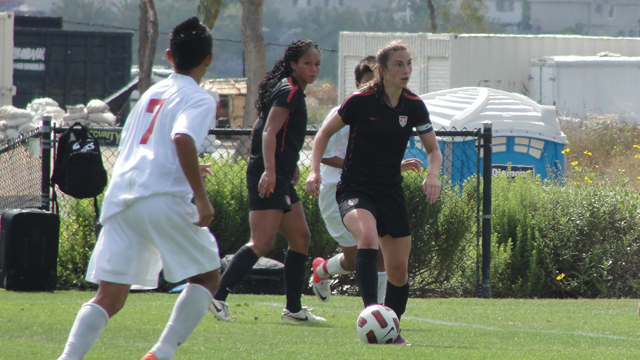 As each day ticks by, the U.S. U17 Women’s National Team draws closer and closer to their penultimate challenge of the year: competing at the 2012 U17 Women’s World Cup in Azerbaijan.

With one eye on the start of the tournament on September 22, head coach Albertin Montoya took his players abroad to Eastern Europe at the end of July, for an eleven-day trip that included four friendly matches.

“Overall, the trip was really fantastic,” forward Andi Sullivan wrote TopDrawerSoccer.com in an email. “I think as a team we definitely grew with the unique experience. There was a really special positive energy just surrounding every piece of the trip.” 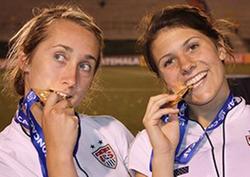 Summer Green and Madeline Bauer after their
CONCACAF Championship.

The team made stops in Maribor, Slovenia and Zagreb, Croatia, mixing it up against a variety of opposition along the way.

On July 23, the USA opened up the trip by defeating Hungarian champions FC Viktoria 8-0. After picking up wins against Austrian club Luv Graz (2-1) and Slovenian champion ZNK Pomurje (4-1), they wrapped up the experience with a 2-1 defeat of the full Slovenian Women’s National Team.

That last game proved to be one of the most difficult tests of the trip.

“The most challenging aspect of the trip was playing Slovenia's full national team,” defender Brittany Basinger wrote TopDrawerSoccer.com in an email. “That was a first for me and many other girls on the team (to be playing a full national team). They were very technical and smart with the ball so we had our hands full throughout the entire game. It was a great challenge for all of us!”

But all four games provided a unique challenge of its own, and will all likely benefit the U17s come World Cup time.

“Each of our games were very different; playing teams we had never seen before and had no film on made us have to adjust on the fly which will benefit us in the World Cup because we are not always going to be able to scout our opponents,” defender Morgan Reid wrote TopDrawerSoccer.com in an email. “Even though we won our four games, we were challenged each time we stepped onto the field, and everyone was able to experience the intense, competitive atmosphere out on the field.”

Part of the reasoning behind taking one more trip for Montoya was getting his team together and testing them with the games on the field.

But along with that, he was looking for an experience abroad, and traveling long distances as a group. The original destination was supposed to be France, but when the two sides were drawn into the same group for the World Cup, that plan was scratched, and U.S. Soccer hastily arranged this jaunt to Eastern Europe.

For some players, heading over and adjusting to the time zone switch provided the challenge that Montoya was looking for by heading overseas.

“The traveling is honestly the hard part,” Sullivan said. “People definitely forget how exhausting it is to have such long travel days on planes and in the airports. It’s draining.

“Along with the fact that we were all dealing with 6-9 hours of a time difference. Your brain doesn’t know right from left and it’s actually pretty entertaining to see. It makes for a tough few first days with a lot of naps but once we get a few trainings in we get into the swing of things.”

Added Reid: “There is a lot more that goes into preforming on the field than just soccer; it’s getting enough sleep and food and being in the right mindset with no distractions.”

And although it was all business when the girls hit the training field, completing the preparations for Azerbaijan, they did get the chance to see some of the sights in the cities they visited.

“This trip we got to sight see more than most trips,” Reid said. “We went two separate times to local cities in Croatia and Slovenia where we visited old churches, shopped, took team pictures, and ate plenty of ice cream which was on almost every street.”

Up next for the U17 WNT is a camp scheduled for August, a last opportunity to bring the group together and run through the final paces before embarking on their World Cup journey.

Heading into that final training experience, the group feels ready and will simply look to iron out the last few challenges before heading to Azerbaijan.

“As our last training camp before the World Cup in September comes soon, as a team, we are in great shape,” Basinger said. “Our coaches have prepared us very well and I feel like we will continue to brush up on a couple things but overall I think we are ready to go!”

U17 WNT Roster for Europe Trip