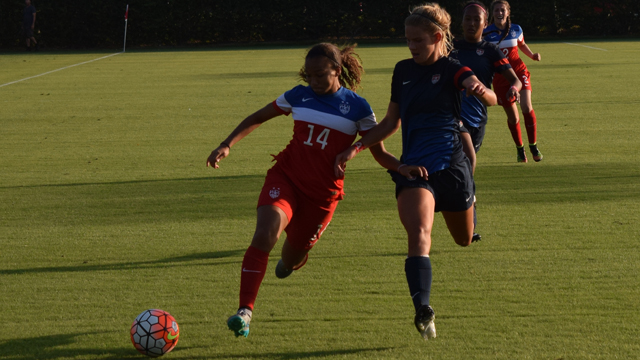 CARSON, California - The U.S. U17 Women’s National Team topped the U.S. U16 Girls National Team on Saturday at the National Training Center. The scrimmage served as the final event of the October camps for both age groups. The two teams had been run concurrent camps at the U.S. Soccer Federation facility since Oct. 11.

Colorado Rush forward Civana Kuhlmann led the way on the day with a pair of goals as the U17 team captured a 3-0 win. Naomi Girma anchored an impressive defensive effort from the U17s. The older group relied on a trapping style with high pressure that kept the U16 group from finding much rhythm in the game.

The high intensity game led to plenty of chances for the older side, but there not that many moments with long passing sequences. With all of the players competing for spots on the 2016 U17 World Cup qualifying group, there was plenty to play for on the day in front of a number of influential members of U.S. Women’s Soccer in attendance.

The U.S. U17 WNT thought it had the opening goal seconds into the game and celebrated accordingly, but a raised flag and late recognition from the center referee took the score off the board.

The U17s broke through in the 11th minute when Kuhlmann ripped a shot from distance that pulverized the net. Kuhlmann only needed a step of space to send her effort scream into the goal for the first tally of the game.

The U17s had a good look to double the lead in the 20th minute when Frankie Tagliaferri was open six yards from goal and put her boot on a cross. Her shot went wide of the goal and the game remained 1-0.

The first shot on goal of the game for the U16s came in the 23rd minute when Summer Yates ripped a blast from outside of the 18 yard box. Goalkeeper Laurel Ivory easily saved the attempt to preserve the shutout through the first 30-minute period.

The U17 team elected to keep the same players in the game for the second period while the U16s went for a new look. The U16s did not have the same threat on the break without the dribbler Yates in the game. The U17s continued to trap and press with the emphasis on creating scoring opportunities for the giveaways.

Tagliaferri helped create another great look at the goal seven minutes into the second period. She beat one defender on the dribble to get to the end line. She put her cross at the center of the six-yard box where Jordan Taylor was waiting for the ball, but the volley from the Ohio Premier Eagles player went over the crossbar.

The U17 WNT made it 2-0 13 minutes into the second period. Kuhlmann toe poked a shot home from 12 yards out for her second goal of the game. The play started with a corner kick that drifted out to the top of the 18-yard box. The defense scrambled to clear it, but the U17s held it in. Eventually, it fell to Kuhlmann who showed great composure and awareness to place the shot into the corner of the net with a quick strike.

The U17s added a third goal 10 minutes into the third period. Substitute Rachel Jones made a great run between the center backs and received a perfectly weighted pass that rolled across her path. Jones tucked her finish around the out-stretched arms of the goalkeeper and put the U17 WNT up 3-0.

The U16s had a good run of play over the last 15 minutes of the game. Yates hit the post from 25 yards out with 11 minutes left to play.

The younger side looked like it had a goal with six minutes left when an indirect free kick from just outside the corner of the 18-yard box was headed off the crossbar and then into the goal on the rebound, but the referee whistled the play dead for a foul. Sarah Piper headed in the first effort that crashed off the crossbar. Ashlynn Serepca headed in the rebound that was negated by a foul.

The U17s ended the day with a shutout and the win to cap off the October camp in Southern California. The U16 GNT is done for the calendar year. The U17 WNT has another camp scheduled for December.