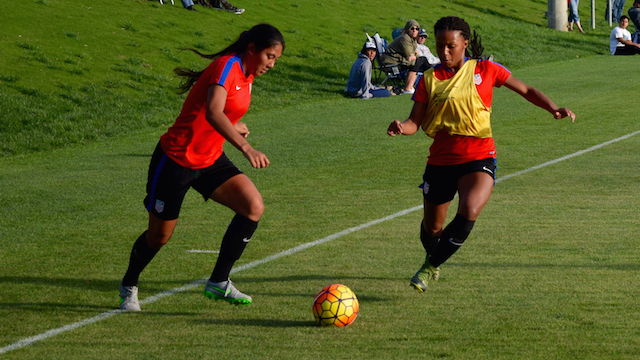 The lone goal of the game for the U18s came in the second of the three 30-minute periods as Erin Gilroy finished off a cross from Malia Berkley for the older squad during the final moments of that period.

The U17 WNT responded in the third period when Rachel Jones pressured the U18 defense into playing the ball back to the goalkeeper. The U17s did well pressing as a group and the goalkeeper played the ball to a defender who was facing her goal, and unaware of the incoming tidal wave of pressure. Sophia Smith stepped up and won the ball off the defender and then put away the chance.

Jones scored the game-winner with eight minutes left when she broke free of her defender and had an open shot from just inside the 18 yard box. Jones did well to keep her balance and put the shot away in the bottom corner of the net.

The U.S. U17 WNT is in preparing for the 2016 World Cup in Jordan, which begins on Sept. 30. The U.S. qualified for the event after winning the 2016 CONCACAF Championship in Jamaica in March. Last week’s camps was the first gathering of the group since winning the event. Forward Ashley Sanchez (full national team commitments) and defender Kennedy Wesley (injury) were not included for this month’s camp.

The U.S. U18 WNT is fresh off a successful campaign in La Manga, Spain where the U.S. went 2-0-1 while playing against U19 national team sides. All of the girls on this team are eligible for the 2018 U20 World Cup, but players are also in consideration for the 2016 U20 World Cup.

The best chance of the opening 30-minute period came from Jojo Harber. The winger had a good look at the goal when Jordan Canniff sent her in on goal after beating her mark on the dribble. Canniff played the pass into the 18-yard box and Harber was in the right spot to put it away, but the ball took a skip as it came into her feet and the shot went wide of the frame.

The opening phrase of the game featured a number of battles in the center of the field, but not much in terms of shots. Both teams were evenly matched and had spells of the first period where both took command of the game for decent spells.

The second 30-minute period was much of the same with limited chances for both sides. The defensive performances across the board were noteworthy as Namoi Girma and Karina Rodriguez set the tone for the U17s.

The U18s found the breakthrough in the 59th minute when the constant pressure from the older eventually led to an opening for the group. The play started down the right side and ended with Berkley setting up Gilroy for the goal after the U17s failed to gain possession of the ball on multiple clearance attempts.

The U17 defense was slowly becoming unbalanced with the attack of the older group and the goal exploited an overcommitment to one side of the field while the U18s quickly picked out Gilroy in a 1v1 situation inside the 18-yard box.

The younger youth national team went into the final 30-minute period trailing by a goal, but that lead did not last long. The U17s found the equalizer in the opening moments of the final period.

The play started with Rachel Jones applying pressure to a defender and then turning on the jets to pressure the goalkeeper into a hurried clearance. The goalkeeper played it out to a defender, but Sophie Smith was on the defender’s back and picked the ball off her feet. Smith was efficient with her touches and tucked away the shot from 15 yards out.

The U17s took the lead with eight minutes left in the 90-minute game when Jones received the ball with her back to the goal from about 18 yards out. She held off her defender and turned on goal. She rifled her shot through a small window and into the bottom corner of the net.

The U18s had a chance late at an equalizer, but Alexa Spaanstra did well at positioning herself between Gilroy and the ball, which took the attacker out of the play after she created an opportunity down the left wing.

The two goals in the final period lifted the U17s to the win in the scrimmage between the two age groups, which wrapped up the April camps for both sides.

(Editor's Note: Neither team wore numbers and lineups were not provided. The identification of players during the events of the game was done to the best ability of TopDrawerSoccer.)