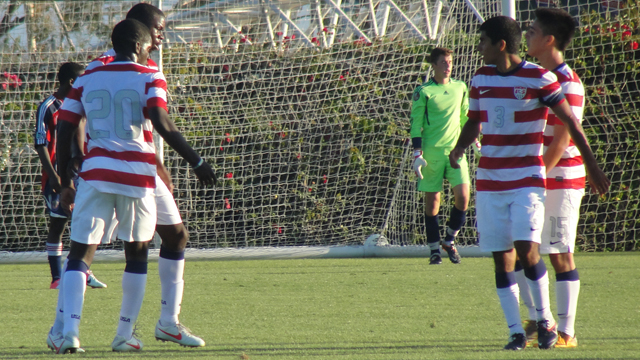 CARSON, Calif. – The new players in camp were out to make a point on Wednesday.

During the first set of friendlies from this week’s camp at the Home Depot Center, some of the players that are fighting for an invite to the Residency program in Bradenton, Florida made the loudest statements.

The U.S. U17 Men’s National Team took on Development Academy sides from Chivas USA and Real So Cal in the exhibition matches. The U17 MNT won both games by a 2-1 score line. 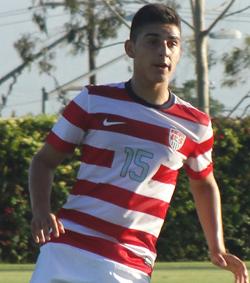 After the game, head coach Richie Williams said not to read too much into dividing the roster into two teams.

“It was completely mixed,” Williams told TopDrawerSoccer.com. “We wanted to see different players play together. There was no ‘A’ or ‘B’ team tonight.”

While the coach still is reluctant to make a depth chart public, he was pleased with what he saw from both groups on Wednesday.

“Overall, I think it was very good and very beneficial to the players and the staff,” he said. “With a 40-man camp, sometimes it is difficult because it is not really a team. Some guys, it is their first camp and they are not used to playing with these guys. They might have been a little nervous.”

The nerves did show in the first half of the opening game against Chivas USA. The local academy trotted out a roster of players born in 1995 – basically a year or two older than most of the U17 roster.

“In the first half, the guys were concentrating on getting organized but they forgot about the part of closing the ball down,” Williams said. “[Chivas USA] had a lot of the ball and we were not making it difficult on them.”

Williams’ group survived that half and controlled the rest of the evening.

“I thought everybody did well and worked extremely hard,” he said. “It was positing to see them competing and getting two good results.”

Rubio Rubin (Westside Metros) and Ahinga Selemani (CSA Wolves) scored goals in the second half to help the U.S. start the night with a win.

Rubin found the back of the net first in the 55th minute off a header in traffic. Chistopher Lema (New York Red Bulls) delivered a great free kick to the far post and Rubin jumped over his mark to nod the ball into the net.

“Rubio is one of our more consistent performers,” Williams said. “He had another good day.”

Selemani scored 25 minutes later when he sprang past an offside trap thanks to a nice pass from Sebastian Elney (Boca United). The Michigan resident rounded the keeper and scored into the open net.

Chivas USA resnded with a few chances in the final ten minutes. Jose Dheming managed to pull one back on a fluky goal. A deflected Chivas USA shot landed on Dheming’s foot about two yards from goal. While the U17 defenders raised their arms in unison (the universal signal for offside), Dheming put the ball into the back of the net.

The U.S. held on during the last couple of minutes for the win.

John Requejo jumped into the attack often during the second half and had one quality look on goal. The outside back, who wore the captain’s armband for part of the game, just missed the target with his effort from range.

Marius Heislitz made a great save in the first half to keep the score at 0-0. Marco Delgado sent in Marc Verso on goal via a through ball past the center backs. Verso hit it low and to the near post. The Georgia United keeper had it covered with a diving save.

Cameron Lindley asked to come out of the game in the opening 10 minutes due to an ongoing nagging injury.

Brian Pacheco is always there. The Pateadores target man, who will be playing with LA Galaxy at the MLS Sum Cup in August, netted the opening tally in the first half off a header in between two defenders.

“He has a knack for around the goal,” Williams said about Pacheco. “I thought he played well. He finds those goals.”

Chivas USA Academy outside back Adonis Amaya delivered the cross that Pacheco nodded home on the far post for the first goal of the game in the 39th minute.

The play started with Alan Winn (Solar SC Chelsea) ripping a shot from 25 yards out that clanked off the post. The rebound eventually made its way to the left touchline where Amaya hit a perfect cross from Pacheco to nod home.

Mario Da Silva (Parkland Predators) doubled the lead in the 66th minute off a great pass from Jake Rozhansky (OBGC). The Maryland-native hit a beautiful cross from 40 yards out to the far post that Da Silva ran onto and finished with a one-time effort.

A dozen minutes later, Real So Cal cut the lead in half when Juan Fernando Samayoa hit a laser of a shot past James Marcinkowski (San Jose Earthquakes) and into the net.

Like in the earlier game, the U.S. buckled in and held on for the 2-1 win against the Academy side much thanks to the midfield, which was anchored all game by youngster Benjamin Swanson.

“I thought it was a pretty good game,” Swanson told TopDrawerSoccer.com after the game. “I thought we moved the ball well in the first half. In the second half, it opened up and we were able to add another goal.”

Swanson is the youngest field player (alongside Cameron Lindley – both were born on July 18, 1997) at this camp. However, immaturity has not been a factor for the Columbus Crew Academy product.

“At first, it was an eye-opening experience in terms of how fast and intense the game was,” Swanson said about the camp so far. “I getting used it more and more. It has been a great experience overall.”

Swanson, while not getting on the score sheet, was the maestro of the day for the U.S. His carefully crafted passes helped open up the opposition on a number of occasions.

Like Lindley, Redding is dealing with an injury this week. The center back was only planning to play 20 minutes, so the substitution was not unexpected.

Marcinkowski and Caldwell both came up with quality saves during their times in net. Caldwell had a one handed save in the game off a header. Marcinkowski blocked a shot with his shoulder in a 1v1 situation.

Flores nearly scored the opening goal in the 14th minute when Pacheco laid off a great pass to the gifted attacking midfielder. Flores ripped a shot on frame but it was cleared off the line by two defenders who had retreated after the keeper came out to stop Pacheco.