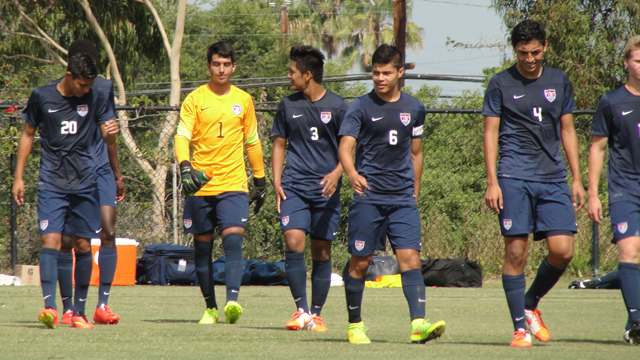 CARON, California — The U.S. U17 Men’s National Team wrapped up its July camp at the National Training Center on Saturday with a pair of scrimmages. The end result was an undefeated record from the week.

The U17 MNT battled to a scoreless draw against Sport Club Orange County PDL and then trounced LA Galaxy Academy 3-0.

“The first game was a little bit slow,” U17 MNT head coach Richie Williams told TopDrawerSoccer about the U17s showing against Sport Club Orange County (SCOC). “The pace was slow. I didn’t think we had a good first half. The second half was much better. We were okay, but lack of urgency and lack of aggressiveness going forward. The ball wasn’t moving as quick. There wasn’t as much movement off the ball.”

The coach was pleased with the performance against Galaxy.

UC Riverside’s Ruben Valencia was a thorn in the side of the U.S. U17 MNT defense for the first half. The Highlander had the four best chances from the opening 45 minutes thanks to some crafty play on the wings from UCLA duo Willie Raygoza and Kevin De La Torre.

Valencia’s first chance came in the 18th minute when he intercepted an errant pass from John Nelson. Goalkeeper Kevin Silva erased the error with a good save for his first of the day.

Three minutes later, a through ball from Shion Jahangiri to Valencia opened up the U17 defense. Valencia tried to round Silva, but the goalkeeper did well to push the forward wide and slim the angle on goal. Valencia holed up in the corner and waited for teammates while the U17 defense retreated.

With options available, Valencia picked out De La Torre who tried his luck from just outside the 18-yard box. Silva made a diving save to keep the effort out of the net.

With 10 minutes left in the half and Valencia’s nemesis out of his cave, SCOC had the best chance to score the opener. The play started with a good combination down the left side of the field from the PDL side. The U17 defense failed to track the runners and Silva left his nest to cut off the angle on the attacker.

Instead of trying to beat Silva, the winger hit a diagonal pass back to Valencia at the center of the six-yard box. U17 center back Hugo Arellano’s sliding challenge on the shot was just enough to keep the shutout alive.

Valencia was not done though. The striker was in the right place at the right time right back the halftime whistle. Valencia popped up in the six-yard box with the ball on his foot after a failed clearance after a set piece from SCOC. Valencia guided the ball back toward the opposite post. Silva’s quick reactions helped him swallow up the shot in his midsection.

The U.S. did have two goal scoring opportunities in the opening 45 minutes. Monterrey FC forward Joe Gallardo was responsible for both of them. The first came thanks to a cross from Pierre Da Silva. Gallardo tried to redirect the cross, but he missed the frame.

Da Silva and Gallardo linked up again when the winger knocked down a high clearance attempt for the striker. Gallardo lined up his shot, but Jake McGuire easily snatched up the feeble effort.

After getting bossed from much of the first half, the U.S. U17 took control of the game in the second half.

Substitute Weston McKennie’s energetic presence forced a turnover from an SCOC defender 40 yards from goal. Kai Koreniuk raced onto the loose ball and sped into the attacking third. Koreniuk directed his shot over goalkeeper Thomas Olsen’s left shoulder, but Olsen swatted the effort away.

Matthew Olosunde, now playing as a winger, was responsible for the next look on goal. The New York Red Bull player raced past the right side of the field and tried to beat Olsen at the near post, but his shot missed the mark.

Thomas McCabe had the last shot of the game. The center midfielder’s driven effort took two detours on the way to Olsen’s home, but the keeper was agile enough to push the shot out for a corner.

The U.S. U17 Men’s National Team started the second game of the day brightly and never looked back. Kyle Gurrieri, Jonathan Gonzalez, and Keegan Kelly dominated from the midfield at the opening whistle. While the midfield trio took care of work, McKinze Gaines treated his defender like a well-oiled turnstile. It was an all-out offensive attack from the youth national team.

Gaines broke free in the third minute and delivered a cross into the center of the 18-yard box for striker Eric Matzelevich. The Bethesda-Olney attacker’s ambitious chest shot went over the cross bar.

The crowd only had to wait six more minutes until the opener gleefully arrived. Matzelevich bulldozed the Galaxy defense and then tried to lift his shot over the keeper, but Galaxy goalkeeper Max Watkin tipped the shot away. Kelly was there for the easy finish into the open net.

Gaines nearly doubled the lead for the U.S. thanks to an incisive pass from Kelly. The Lonestar speedster opted for the five-hole with his shot, but Watkin closed his knickers just in time.

Gaines’ appetite for a goal was insatiable and he continued to put himself in the thick of the U.S. attack. His field torching cleats streaked down the right side in the 21st minute. This time, Gaines went for the chip. It was just an inch too high though as his back spinning shot hit off the crossbar. A retreating LA Galaxy defender accidentally knocked the ball back toward his own goal, but he atoned for the slipup with a clearance off the line.

The second goal for the U.S. came minutes later when Tyler Adams hit a great pass down the right touchline for Kelly. The Baltimore Celtic attacker let the ball run past him and beat his defender to the endline. Kelly cut in and picked out Rice’s delayed charge into the box. The Chicago Magic PSG player expertly placed his shot into the upper corner of the net for his first goal of the game.

Three minutes later, Rice scored his second of the afternoon. Kelly went for a stroll through the middle of the field again. This time, he picked out Gaines on the left. Gaines cut in on his right foot and hammered a shot that smashed off the post. The rebound landed in Rice’s path for a one-touch effort that found the back of the net. It was the goal of the day as Rice perfectly hit the shot, which went off the crossbar and nestled into the twine.

“I think most of the guys have played together at one point or another,” Williams said about the cohesion of the squad in the Galaxy game. “We have had some new guys in camp that maybe haven’t been with us before but they know each other from the past when they were younger. They did well. They were organized and played well as a unit. It was nice to see. That is what we strive for.”

With a 3-0 lead, the U.S. continued to attack but did not have any more golden scoring opportunities over the final 60 minutes.