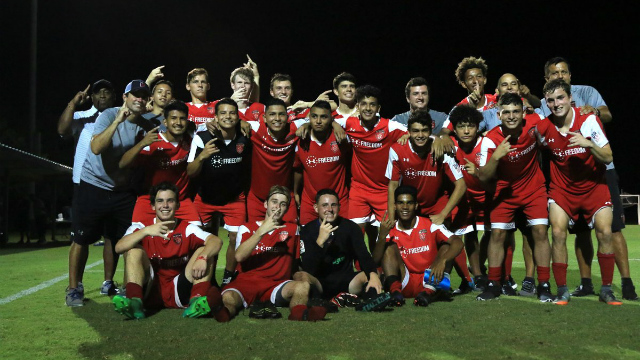 The 2017 semifinals field is officially set in the Development Academy.

Friday saw the field shrink to four U18 teams left, as all four quarterfinal matches featured plenty of drama. One was decided with a last-gasp winner, three went to extra time and one on to penalties.

Here's a quick recap of how things played out.

After 120 minutes, a winner failed to emerged between the Galaxy and Real Salt Lake.

Penalties were needed out in Casa Grande, and it was LA that kept its cool, advancing by a 4-1 score on spot kicks.

Efrain Alvarez put the Galaxy out in front in the 45th minute. Midfielder Taylor Booth answered for Real Salt Lake in the second half.

The most wild game on Friday took place between Seattle rivals, as the Sounders progressed thanks to a 3-2 win against Crossfire Premier.

Jackson Ragen put Seattle in front for good, scoring in the 111th minute on a corner kick.

The Sounders jumped out to a 2-0 lead in the first half, as Jamie Dimitroff and Paul Rothrock both tallied in the game's first 31 minutes.

Crossfire weren't about to step aside and let the Sounders cruise, however. They cut into the lead in the 63rd minute. Rothrock earned a penalty to give Seattle a chance to make it 3-1, but the spot kick hit the post.

With just minutes left in the second half, Crossfire equalized. Declan McGlynn's shot from just outside the box found the back of the net to make it 2-2.

Ragen's goal, a thumping header from a corner kick with nine minutes to go, would be enough to send Seattle through.

It was a thriller in Tukwila as @SoundersAcademy defeated @CrossfirePrmr 3-2 to advance to the Final Four of the #AcademyChampionships! 👏 pic.twitter.com/DeUNjdElQ8

The Rapids scored twice after conceding the opener to secre the upset at Orlando City stadium.

Orlando City opened the scoring in the 17th minute through Isaque Couto, only for Liam Johnson to cancel it out 11 minutes later.

Neither side managed the breakthrough until the 88th minute. A long diagonal ball from the flank bypassed every Orlando defender, and found a streaking Rhys De Sota in behind. The Stanford recruit finished calmly to put the Rapids in front for good.

It took 98 minutes for someone to finally score in the searing Texas heat, as Texans SC Houston defeated Real So Cal over 120 minutes.

Eight minutes into the first overtime, Christian Cappis found Alejandro Alaniz in front of goal to give the Texans a lead.

Forward Alex Bruce put the game away with a second goal in the 115th minute.