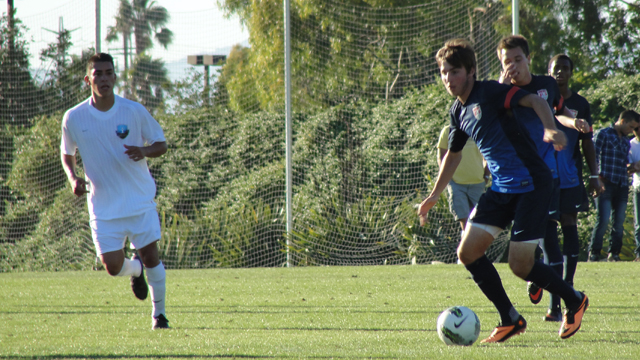 CARSON, Calif. – The U.S. U18 Men’s National Team wrapped up its first training camp of the 2013-14 cycle on Saturday at the National Training Center with wins over Real So Cal U18 and LA Blues. 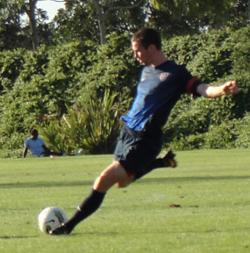 The day started with a 5-2 win over local Development Academy side Real So Cal U18. Sebastian Elney and Brooks Lennon both scored twice for the youth national team. Mukwelle Akale added the other goal for his third of the week. John Requejo and Chet Castellaw, both players with youth national team experience, scored for Real So Cal in the loss.

In the afternoon fixture, Jeremy Ebobisse-Ebolo scored the game-winner with five minutes left to give the youth national team a 2-1 win over LA Blues, a USL PRO team. Dembakwi Yomba scored the opener in the first half. Blues answered via a Dakota Collins tally early in the second half.

“I’m very happy with the progression of the team,” U18 MNT head coach Javier Perez told TopDrawerSoccer.com after the second game. “As a coaching staff, we really enjoy working with this talented group that we will have for the next couple of years. We have a good breed of players that we can work with.

“The games today reflected quite well the philosophy and style of play we want to implement with the teams,” Perez continued. “This morning, it was a competitive game and we had a good result, which was positive to build up the confidence of the team.”

Perez also spoke about the massive age difference in the second game as his squad is made up of 16 and 17 year olds while LA Blues featured mainly ex-college standouts who were around 23 years old.

“[Blues] adjusted well in the game and we defended more than we wished in the second half,” Perez said. “At the end, it is a good game and it is win. It helps build confidence especially now that we are headed to France for that tournament.”

“Based on the performances during the week and the performances today, we have to meet tonight and make some tough decisions,” Perez said. “It is never easy for a coach to have to leave a player out of a camp or a tournament because you get attached especially at this age group where everyone is working so hard. You want to reward, but the reality is you can only take a limited number.”

Overall, the coach was pleased with how the first camp with this age group went.

“I think everybody is very happy with the progression. I think we had the opportunity to evaluate which players are ready now and which players will be there in the future. Having a pool of 36 is a luxury.”

That depth of 36 was shown off on Saturday with every player getting a run during one of the games. The second game started brightly for the older squad with a couple of chances in the opening ten minutes.

Center back Tommy Redding blocked the best chance for the Blues, which was a shot from 12 yards out following a hectic defensive effort off a cross.

The U18s answered nearly minutes later when Corey Baird set up a shot for Yomba. The striker’s effort drifted wide of the far post.

Baird received the ball and made the quick pass to Yomba who only needed a little daylight before burying his shot into the lower corner of the net at the near post.

Sebastian Saucedo nearly doubled the lead for the youth national team 11 minutes before half when he hit a curving shot from over 30 yards out that required a diving effort from the Blues keeper to keep it out of the net.

Shortly after halftime, U.S. should have doubled the lead when Yomba and Saucedo applied high pressure and won the ball back in a great spot. Saucedo slotted the ball to Benjamin Swanson in front of the 18-yard box, but his effort floated over the keeper and the net.

Blues put the game back on level terms nine minutes into the second half when Collins’ speed put him behind the left side of the U.S. defense. The former Cal Poly standout received the pass from all-time Creighton(m) great Jose Gomez with only the keeper to beat. Collins made it an easy finish for the equalizer.

The older squad, which is out of season, continued to knock on the door for the go-ahead goal, but the U18 defense held strong.

The U.S. netted the game-winner on a defensive lapse by the Blues. Substitute Connor Smith slotted fellow reserve Ebobisse-Ebolo in through a Swiss cheese back four. Ebobisse-Ebolo tucked it around the keeper for the final tally of the day.