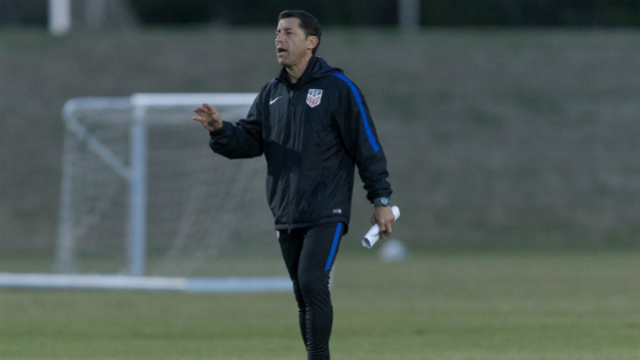 The U.S. Under-18 Men’s National Team will head to Vrchlabí, Czech Republic to compete in the 2018 Vaclav Jezek Youth Tournament from Aug. 18-26.

U.S. U-20 Men’s National Team head coach Tab Ramos, who will lead the group during the tournament, has named 21 players to the roster, all of whom were born in 2001, including two players receiving their first call up to the U-18 player pool: Folarin Balogun (Arsenal FC) and Nathan Harriel (Chargers Soccer Club).

The U-18’s will begin play Tuesday, Aug. 21, when they face United Arab Emirates. The team will play again the following day against Bulgaria and will conclude Group A play on Aug. 24 against Czech Republic. The opponent for a final placement game, which will be played on Saturday, Aug. 25, will be determined following the conclusion of group play. That opponent will be a team from Group B with the same group finishing place. Group B consists of: Japan, Hungary, Slovakia and Ukraine.

The USA has found recent success in the tournament, bring home the titles in 2014 and 2016.

The USA will look to continue its winning streak after defeating Costa Rica twice (2-1, 3-0) during a training camp in Orlando in February.

This group of players is eight months into its two-year cycle as U-18s before transitioning to the U-20 program in 2020 and will form the core of the group that will eventually attempt to qualify for the 2021 FIFA U-20 World Cup.

The group got off to an early start to its cycle with a training camp at the Chula Vista Elite Athlete Training Center in November 2017 and took part in the first ever U.S. Soccer Men's YNT Summit two months later.

Of the 21 players called up for the tournament, 19 have registered at least one season in the U.S. Soccer Development Academy. Seven players from the roster have earned Academy Best XI selections: Julian Araujo, Nico Benalcazar, Ulysses Llanez, David Ochoa, Marcelo Palomino, Leonardo Sepulveda and Kris Shakes. At the conclusion of the 2017-2018 Academy season, Llanez was named U-16/17 West Conference Player of the Year.

Four players called up for this camp were a part of the 2017 FIFA U-17 World Cup team in India: BRyan Reynolds, Indiana Vassilev and Taylor Booth each made the final roster, while Ulysses Llanez traveled with the team as an alternate.