U18 players impressed with Richie Williams 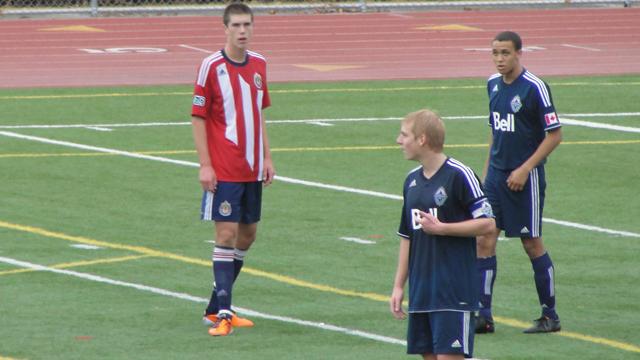 Chivas USA Academy forward Ben Spencer and midfielder Marky Delgado have been pretty busy in 2012. At the start of the year, the two stars of the Chivas USA Academy were called into camp with the U.S. U18 national team. Since then it has been non-stop soccer for the pair with Academy games and preseason training with the first team.

The Goats’ stars did take some time on Saturday to talk with TopDrawerSoccer.com about appearing in the first camp under new U18 head coach Richie Williams, their chemistry on the field, and training with the Chivas USA first team. 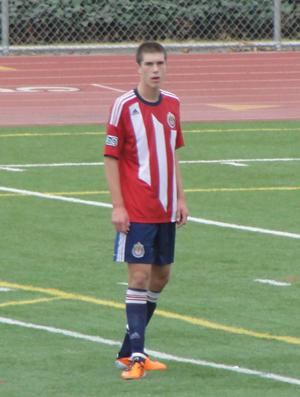 Ben Spencer
“It was a good camp,” said Spencer. “Richie Williams is a fun guy to work with and there were awesome players out there. It was fun training with the best players in the country.”

His teammate echoed his sentiment about training for the first time with the new coaches.

“I liked it out there,” said Delgado. “The coach brought a new training style, so you had to get used to it. It took everyone some time, but after awhile we got it.”

Delgado was with the U.S. residency program last year, so he has plenty of experience with national team training camps. He did not go into detail about what exactly made Williams’ style unique, but did refer to it as “different.”

This camp also added another twist for Delgado, as the coaching staff put the talented playmaker in a new position.

“The coach was playing me at defensive mid,” said Delgado. “At residency, I was playing on the wing and then I moved to the middle, but I was definitely comfortable at [defensive mid].”

Spencer also has some experience with the youth national team program. The 16-year-old striker spent time with the U15 national team before he enrolled with the RSL-AZ residency last year.

The 6’4 New Mexico native does not face the same positional dilemma though. He has quickly matured into one of the most lethal forwards in the Development Academy with 30 goals to his name in just over a season of a play.

“Ben did really well,” said Delgado about his teammate’s play in Florida. “He held the ball, scored some goals, and did what he had to do.”

Spencer attributed his success in Florida to having his hard-working teammate in his same group for many of the drills and scrimmages.

“There is a lot of chemistry between us from playing in the Academy, reserve games, and training with the first team,” said Spencer.

On Saturday, the two combined for two goals in a 4-2 victory over Vancouver Whitecaps U18. Delgado set the stage both times for the striker to put the ball in the back of the net. The next day, Delgado and Spencer scored two a piece in a 5-1 win over California Development Academy U18.

As for anyone else who performed well at the national team camp, Delgado praised LA Galaxy Academy’s Willie Raygoza, who he said had a great camp by retaining possession and facilitating the offense for their group.

When asked to assess their own performances in Florida, both thought they did well. Delgado also mentioned that an assistant coach told him “he did a great job” in the exit interviews.

Both players recognized that even though the acknowledgment of getting called up to the national team is nice, the work does not stop there.

“You have to put in the work,” said Spencer. “The guys work hard to get there, and now it is all about working hard to stay there.”

The two 16-year-olds have definitely put in the work with a week of two-a-days at the U18 camp, followed by preseason training with the Chivas USA first team, and then Academy games, but it looks like the work is starting to pay off for them.

Spencer impressed everyone in the Chivas USA organization when he performed exceptionally well in a fitness test on the first day of training camp.

“I didn’t have much of an off-season,” said Spencer with a nonchalant smile. “I felt good, and I guess the results showed in the beep test.”

With the way Spencer and Delgado are playing, their schedules are going to remain busy in the near future.