CARSON, Calif. — The U.S. U18 Women’s National Team defeated L.A. Strikers, a W-League side, 4-1 on Saturday to conclude the August camp at the National Training Center. 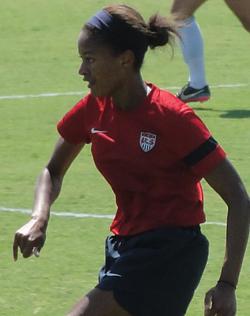 Every player on the U.S. roster appeared during the three 30-minute periods, which the Americans dominated fairly convincingly from the opening whistle.

“[I was] really pleased with the performance today,” U.S. U18 WNT head coach April Heinrichs told TopDrawerSoccer.com after the game. “They’ve had 13 sessions in eight days so it is really difficult to come out and stay focused.”

The youth national team came out on the front foot and nearly had the opener in the beginning seconds when Mikaela Harvey’s blast was turned away by the Strikers goalkeeper into the path of Imani Dorsey.

The Freestate United forward was denied on the doorstep by a tremendous kick save from the Striker keeper.

U.S. recorded the opening goal eight minutes later when Colorado Rush midfielder Jordan DiBiasi finessed a shot through traffic and into the corner of the net. The starting lineup for the U.S. could not muster another tally despite four shots on goal from the first period.

Coach Henrichs made a complete line change for the second period, and the offense clicked early and often. Tanner Haughn had a good look at the net after some sparkling combination play with Rachel Corboz at the top of the box. Haughn’s shot went wide of the net.

Eight minutes into the second period, U.S. netted the game-winner when Betsy Brandon headed home a cross from Haughn. Brandon was open at the top of the 18-yard-box and expertly directed her header to the lower corner of the net – against the grain of the goalkeeper’s momentum.

Four minutes later, Michigan Hawks star Megan Buckingham joined the party with a curling effort from 30 yards out that sailed over the keeper and into the net to give the U.S. a 3-0 lead early in the second period.

Buckingham nearly had her second of the day when she got on the end of a sublime cross from Haleigh Echard, which snuck in behind the Strikers’ defense. The goalkeeper blocked Buckingham’s effort.

U.S. did not wait long for its fourth of the game when Kayla McCoy sliced in between the two center backs and put just enough on her shot to squeeze past the sliding keeper and trickle over the line.

Strikers cut the lead to three goals in the final moments of the second period when Victoria Boardman found the bottom corner of the net from 18 yards out.

The U.S. handily dominated the second period with 10 shots and six of them on goal. Strikers only managed one shot on goal, which found the back of the net.

“I was really pleased [the game] did not degrade much [from one period to the next],” Heinrichs said. “There were some fantastic combinations.”

The tempo of the game fell off a bit in the third period, as the older side tried to close the field with a very high offside trap and the youth national team refused to play the long-ball game with the acres of space behind the line. The midfield battle created only a few chances. U.S. goalkeeper Alexandra Nicholas made a couple of few saves during her time in the light to keep a shutout during the final period.

* The U.S. did not wear numbers on the jersey, so the lineup is an educated guess based on familiarity with some players.