CHULA VISTA, California – In training gear instead of jerseys, they watched from the sidelines on Wednesday as the older U.S. U20 Women’s National Team took on Japan.

The U.S. U18 team, called into camp at the U.S. Olympic Training Center this week alongside the U20 squad, will get their turn to battle competition this week; but they’ll get less of it than they’re used to.

The U18s took to the field for technical and tactical work on Thursday in a scene they better get used to, because that’s the direction U.S. Soccer is moving for not only this week but the foreseeable future. 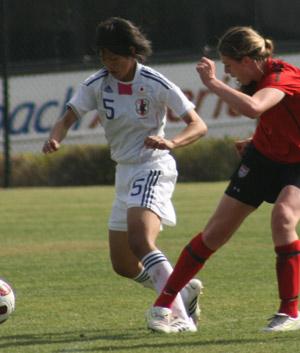 U20 WNT competing against Japan during the U18/U20 camp in Chula Vista.
“We’re trying to talk at the community level about the issue of having so many games and so little training sessions. If we’re going to do that, we have to start at the national level,” explained coach April Heinrichs. “If we’re going to lead, we have to make sure we’re true to what we’re preaching. So we’re going to spend a lot of time training instead of just planning for the next game.”

So that means the U.S. U18s will play just one match this week – a far cry from past gatherings. The team also will not scrimmage against their U20 counterparts, something they surely would have relished.

But just because the two sides will not face off this week, does not mean they won’t enjoy interaction. After all, the two teams were brought together for the purpose of building harmony program wide.

“We’re trying to build a team that’s all on board with the same philosophy and same principles,” Heinrichs said. “The (U18s) are age eligible for the 2012 World Cup, but I told them from the beginning that they are in effect playing for 2014. Some of them are so young that it’s a stretch for them to make it next year.

“But we’re able to give them a look at players who will be competing and it’s a good message to send. It’s about long term development.”

The U18s displayed a great chemistry with one another, some of which can be attributed to many of the players playing together on last year’s CONCACAF Women’s U17 Championships in Costa Rica.

The likes of goalkeeper Bryane Heaberlin, who has recovered from a broken leg to return to camp, Jaelene Hinkle, Cari Roccaro, Cassie Pecht along with Lindsey Horan and Kaili Torre all return after making the trip to Costa Rica.

The fact that their championship ended with a disappointing loss and failure to qualify for the FIFA U17 World Cup, only seems to have strengthened the bond of the group, a note confirmed by Real Colorado defender Jaelene Hinkle, a veteran from that U17 team.

“The experience, along with the loss, really brought us closer together because you really learn through both situations how much you need each other,” Hinkle said. “The loss was definitely very difficult for us to swallow as a team, but I think because of it we really relied upon each other to be there for one another, and because of that we really did grow much closer together. I think the loss will forever motivate us because we don't want to find ourselves in that situation again.”

Hinkle and her teammates won’t have to worry about that this week. They’ll be too busy training.