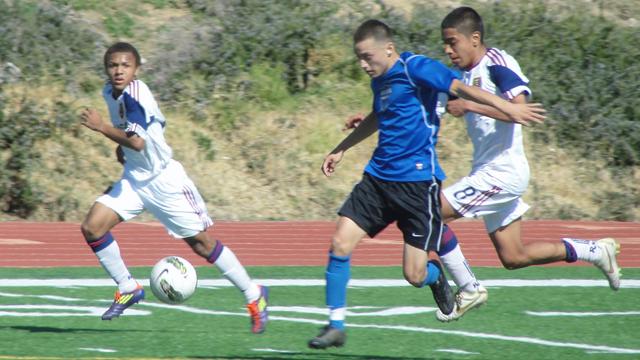 OAK PARK, Calif. – Real So Cal and RSL-AZ’s U18 teams are even on points this season in the SoCal Division. On Sunday, they were even on the field too.

The two U18 teams battled to a scoreless draw in the first contest of the day, as the teams remain tied for fourth in the standings after the weekend.

Both clubs played the day prior and it was obvious in the morning game on Sunday with wasteful finishing and tired legs in the second half.

The first real scoring chance of the fixture came just before half time when RSL-AZ’s Etiandro Tavares raced behind the Real So Cal defense, but keeper Josh McNeely, who had an exceptional game, thwarted Tavares on the breakaway.

The visitors did come close to breaking the scoreless draw in the second half on two separate occasions. In the 62nd minute, Ricardo Velasco dribbled through a number of defenders before ripping a shot from distance, but his effort skipped off the crossbar.

Six minutes later, Jordan Allen, who was the most dangerous player on the field, beat his defender on the wing and ripped a shot at the near post that hit the outside of the post.

Real So Cal held its own with a couple of chances on the counterattack, but the local team also looked a little tired from a long weekend of games.

“I thought the effort was good, but at times we lacked quality especially in the attacking third,” RSL-AZ Technical Director Martin Vazquez told TopDrawerSoccer.com after the game. “I’m pleased overall. At least we take one point back, but we have a group that could have taken the three points.”

RSL-AZ was shorthanded because striker Maikon Orrellana is currently training with the El Salvador U23 national team in preparation for Olympic Qualifiers. RSL-AZ coach Freddy Juarez said Orrellana is doing well in the camp and definitely in the discussion for a spot when Qualifiers start next month.

In the younger game, RSL-AZ continued its perfect record in divisional play with a 2-1 win.

It only took 90 seconds for the Arizona academy to find the back of the net, when Jose Vasquez’s perfectly weighted pass picked out a well-timed run from Benjamin Lopez. The striker from San Diego easily put the road team up by a goal early in the contest.

Real So Cal nearly had the rebuttal though. A couple minutes after the goal, RSL-AZ’s defense was caught out of position, and Robert Martirosyan skillfully crossed to Dean Wright. The keeper forced Wright wide, and his off-balance attempt hit the wrong side of the post.

RSL-AZ doubled its lead before half and this time it was Lopez setting up the play on a silver platter for his teammates. The forward controlled a loose ball in the 18-yard-box with a soft touch, as defenders quickly surrounded the target player. He looked wide and found a wide-open Lucas Cawley on the right wing.

The midfielder raced onto the pass and hit a one-time cross to the far post, which Andrew Brody converted through traffic for what held up to be the game-winning goal.

Brody was a terror down the left side all game, and even won over some support from the local fans when he juked two defenders near the corner flag with some silky moves in the second half.

Real So Cal closed the lead after half time when Daniel Mondragon struck a shot from a tight angle that went into the roof of the net to bring the home team within a goal. But Real So Cal could not find the equalizer in the final thirty minutes.