U20 MNT preps for CONCACAF with friendly 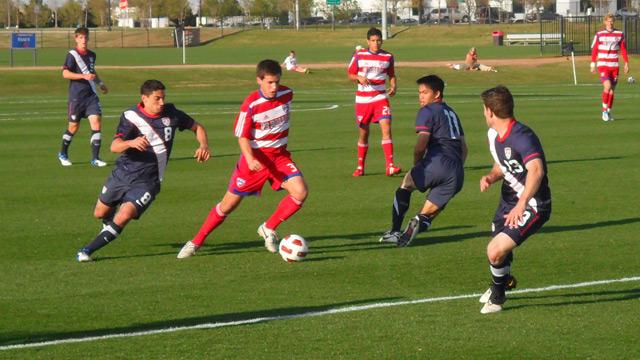 FRISCO, TEXAS - In their final tune-up before heading to Guatemala for the CONCACAF U20 QualifyingTournament (for the FIFA U20 World Cup), an in-form U.S. U20 Men’s National Team easily swept aside FC Dallas 3-0 behind goals from Bobby Wood, Sebastian Lletget and Kelyn Rowe.

Starting what is likely the first XI for the CONCACAF event next week, the Yanks began strong against an FC Dallas team comprised of a mix of starters, reserves and academy players.

Just five minutes into the game, Joseph Gyau, from Maryland but playing professionally with the German club Hoffenheim, would nearly put the United States in the lead with a hard shot from the left side of the box saved well by FC Dallas goalkeeper Josh Lambo (formerly of Chicago Magic). Gyau’s play on the wings would be a consistent thorn in the side of FC Dallas and in the 24th minute, the explosive youngster would play a big part in the United States’ opening goal. 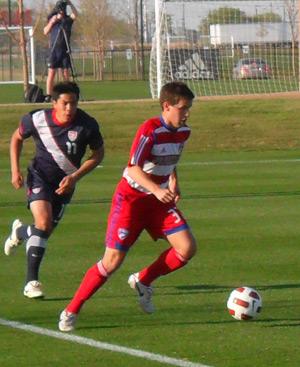 Bobby Wood (left) chases an FC Dallas player in the U.S. U20 MNT's win.
Freed down the left side, Gyau’s speed would prove to be too much for FC Dallas’ academy right back Jack Coleman. Gyau would get off a left footed pass that seemed to be stopped by Lambo, but the ball came free and trickled to Bobby Wood of 1860 Munich who easily tapped home to give the USA the lead.  Wood played club ball with Irvine Strikers before heading to Germany.

“His ability to penetrate with the ball and under duress to find Bobby Wood with the first goal is pretty unique,” said Head Coach Thomas Rongen of Gyau. “He’s made great strides in a lot of areas and especially mentally…you can tell from a young youth player, he’s become a real man with room to grow.”

Lambo would redeem himself in the 35th minute with Wood and Gyau switching spots as it was Wood’s service that found a leaping Gyau at the far post. His header down was well saved by Lambo, keeping Dallas in the game.

Again it was Gyau in the middle of the action for the US, receiving possession in the midfield and sliding an excellently weighted through pass to Sebastian Lletget. The West Ham youth product (formerly of Northern California club Santa Clara Sporting) would shrug off an FCD defender allowing the ball to come in front of him before slotting coolly past an onrushing Lambo to double the Americans’ lead to 2-0.

“I saw Joe got the ball and I gave a little sidestep, Joe gave me the ball and I let it run by. Luckily then I was able to put it in the net” said Lletget. “I think playing in England really does help because besides technique you really have to know how to use your body.”

For FC Dallas, it was a bit of a struggle to find their legs as nearly the entire team was out of the country just 24 hours earlier with the academy returning from a long tour of Spain while the first team faced Tigres of Mexico in Monterrey on Wednesday night. With that in mind, the squad made up of academy players such as Jack Coleman, Boyd Okuwonu, Daniel Garcia, Michael Ambrose, Jonathon Top, Bryan Leyva and Victor Ulloa, held their own pretty well against some of the best the United States have to offer.

The United States would make nearly wholesale changes in the second half with just Kelyn Rowe, Amobi Okugo and Gregory Garza staying on the field among the starters. They would also be given problems defensively as recently acquired Colombian wonderkid Fabian Castillo was brought on at halftime for his first action in an FC Dallas jersey.

The 18-year-old Castillo would pin the US defense back on multiple occasions in his 20 minutes on the pitch giving US right back Korey Veeder lots of problems with his speed and athleticism. Castillo would fail to put any of his chances in the net, however, and the United States would strike for a third and final goal late.

A deep cross was sent in to #1 overall MLS Draft pick Omar Salgado who headed across the box to Kelyn Rowe. Rowe, a freshman at UCLA, would easily slot the goal past a diving Chris Seitz to round off the scoring, a goal Rowe deserved for his exceptional midfield play throughout the evening.

“The dress rehearsal is never an easy exercise, but I was happy with both halves….in the run of play we were pretty solid defensively,” said Rongen. “In the second half, we faced some breakaways that we dealt well with and we were able to get that insurance goal as well so we never stopped playing.”
The United States will head to Guatemala this weekend in preparation for their first CONCACAF U-20 Championships game in Guatemala against Suriname on Tuesday, March 29 at 8PM ET.