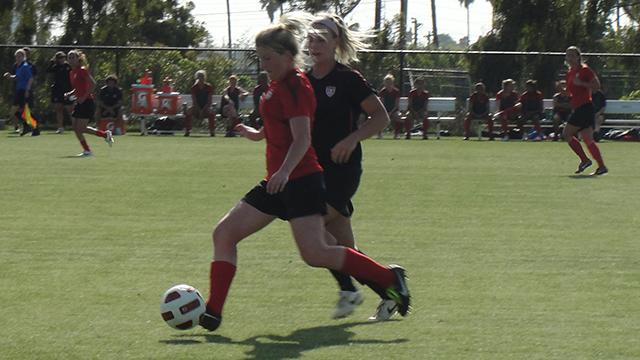 After round one, they are still level, Tuesday’s scrimmage ended in a 4-4 draw with both teams’ clicking early in camp on the offensive side of things. 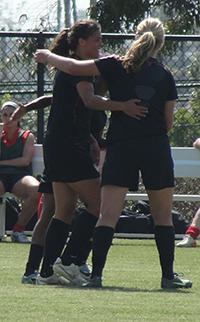 “It was one of those games where it would give the coach grey hairs if it really meant something,” U23 WNT head coach Randy Waldrum told TopDrawerSoccer.com after the game. “We had some great opportunities to score some more, and they could’ve too. It could have been 8-8.”

“Getting to see these new faces and seeing them play in this type of game was really good for us as we move forward and prepare for [an international tournament in] Norway next month,” Waldrum said. “Hopefully, it was as good for [U20 head coach] Steve [Swanson] too – in preparing for the World Cup.”

Swanson thought it was the perfect recipe for his team, as it continues to prepare for the 2012 U20 World Cup in August.

“It was exactly what we needed at this point,” Swanson told TopDrawerSoccer.com. “We got tested in a lot of ways and we got put into situations that we may see over in Japan.

“We have to put our players in situations where they have to think on their own and work out [of problems] on their own. It was a great matchup to go against the U23s.”

A few of the goals that the U20 team conceded were uncharacteristic of a normally staunch defense, but Swanson did not read anything into the fluky nature of a couple of the goals, including one that saw goalkeeper Bryane Heaberlin’s clearance bounce off the back of a defender for an open net tally to the older squad.

“No, it is just not enough experience in those situations,” Swanson said. “We need to sort that out defensively, but that is exactly what these games are for.”

On the attacking side of the ball, the U20 team did well with four quality finishes and a handful of other chances.

Lindsey Horan led the charge on offense with a goal and an assist in the contest. Virginia midfielder Morgan Brian, Wake Forest forward Katie Stengel, and UCLA midfielder Sarah Killion also scored for the U20s.

Brian’s goal opened the proceedings in the most elegant of way in the eighth minute, when Vanessa DiBernardo delicately lofted a pass over the defense and into the path of the midfielder charging into the box. Brian made quick work of the finish to give the younger squad an early lead.

The U23 side answered seven minutes later with two goals in two minutes to take the lead.

Swanson’s group turned on the pressure for the final 10 minutes of the first half and regained the lead before halftime. First, it was Horan linking up with Stengel for an equalizer in the 36th minute.

Then, Kealia Ohai drew what appeared to be a questionable foul for a penalty kick. Horan stepped up and knocked it home to up the U20 WNT up 3-2 at the break.

In the 70th minute, DaCosta grabbed her first of the afternoon on a skillful chip to put the U23 side back on level terms.

The U20s answered right back when Mollie Pathman hit an excellent corner kick into the box that eventually was put into the back of the net by Killion.

The older side had the last say with a goal seven minutes later on another nifty tally from DaCosta, who skated past the center backs for much of the second half.

“We did not defend as well as we needed to, collectively, against a team like this,” Swanson added. “It was a valuable experience and definitely took away things we can learn from.”

Overall though, the coach saw the positives of the outing, especially with how the team moved the ball around the field.

“After the two games against China, we emphasized that we need to move the ball faster,” Swanson said. “And I think that was evident today against a good team.”

The two teams will meet again on Thursday at the Home Depot Center.