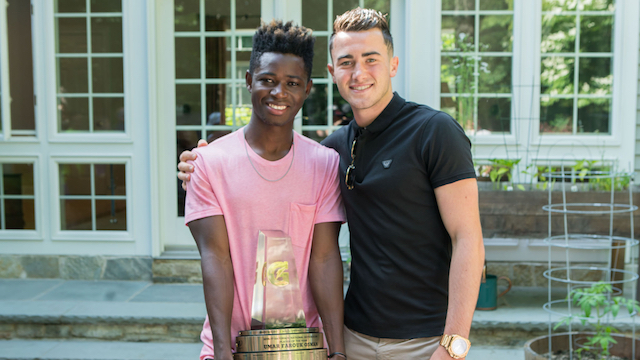 From rival to idol to award presenter, Jack Harrison’s had a big influence on Umar Farouk Osman’s life.

Harrison, the New York City FC midfielder, presented Osman, Hotchkiss School (Connecticut), with the 2016-2017 Gatorade National Boys Soccer Player of the Year, the top individual distinction for high school players. Harrison, the 2014-2015 Gatorade Boys Soccer Player of the Year, surprised Osman at his host family’s house in front of friends. Osman, originally from Tamale, Ghana, graduated from Hotchkiss on June 2, and is at home for the first part of summer before he heads to Michigan for summer classes.

The story between the two began in 2013. Harrison’s Berkshire School took on Osman’s Hotchkiss School in the New England prep playoffs. Osman, only a freshman at the time, left an impression on Harrison.

“I remember playing him for the first time and as soon as he touched the ball you could see the potential and the talent were there,” Harrison told TopDrawerSoccer during a phone interview on Thursday. “He was someone we had to watch out for, he made a big impression on me.”

The respect was mutual as Osman walked away from that game thinking he should model his game after Harrison.

“I like to cut in from the right and put the ball on my left foot,” Osman told TopDrawerSoccer during a phone interview on Thursday. “[I model my game after] Jack Harrison and David Silva.”

Despite hailing from different parts of the world, Harrison, from England, and Osman, a product of Right to Dream Academy from Ghana, they both ended up in New England at boarding schools. Their schools, only separated by 20 miles, have become a hot bed for prep soccer players with numerous top Division I talent passing through the hallowed halls of the two schools over the last decade.

Osman and Harrison are proof of the quality that in those leagues. The NYCFC midfielder quickly emerged as a top talent in college soccer in his lone season with Wake Forest. He has enjoyed similar success at the MLS level.

Following in those footsteps will be difficult for Osman, but Harrison offered him a bit of advice on Thursday.

“He needs to continue doing everything he has to get to this point,” Harrison said about what advice he would give the future Michigan Wolverine. “This moment is just a stepping stone to bigger things.”

Osman was shocked to see one of his idols walk through the door of his host family’s house on Thursday.

“It’s crazy because I was just talking about Jack [Harrison] yesterday,” Osman said. “And I went back and watched that quarterfinal game against Berkshire. I was so shocked [when he showed up]. I didn’t know what to say.”

The Gatorade Player of the Year award tends to leave young men speechless. The recognition as the best player in the country is a huge honor. Osman earned that honor through his play with his school team.

Despite a record of 6-9-2 in 2016, Osman was still recognized as the best talent in Connecticut by fellow coaches. The left-footed attacking midfielder was one of three captains on the team this season. He helped guide a group that experienced awful luck with six injuries taking out starting players during the season. Osman, at times, was a one-man show. He had a direct influence on 28 of the 30 goals that Hotchkiss scored this past season.

The youngster is used to battling through challenges though. He emerged from a plethora of challengers to arrive in the United States after his time at the Right to Dream Academy came to an end in 2013.

“There were over 200 players at the tryouts for my region,” Osman said. “I was one of the players the coaches selected from the tryouts.”

After touring the regions, the best players end up on a trial at the Academy with the best of the best earning a full invite after three months. Osman snagged that invite and spent the next three years of his life in the soccer factory.

When he was in mid-teens, he was given the opportunity to go to England for a few months with the Right to Dream team and train at Manchester City and few other academies. After the tour, he was offered a spot at a few places and also the chance at earning a professional contract when he turned 18. However, he never mentioned this trip to his mom, who is a teacher in Ghana.

“She was not happy,” Osman said about her reaction when he got home.

“Education is definitely important to me,” Osman said. “I’m not going to play soccer forever.”

His next step was Hotchkiss and he found a new home for the next four years of his life, but he never lost track of what was happening back in Ghana.

“The kids want to learn, but they did not have the basic necessities for school - backpack, books, paper,” Osman said. “So my host brother and I started a gofundme, and went back to Ghana to give them some of those things last summer.”

He said it was a bit strange being back in Ghana after all of the time away, but he was very happy to see how the kids were there to learn.

Osman’s joy when speaking about how proud he was of the children trying to better themselves speaks plenty to his character, which was a cherry on top of his Gatorade Player of the Year nomination. The award has typically done a terrific job at identifying players of a higher character with Harrison as another shining example of the standard the previous winners have set for Osman and others in the future.

The newest winner has big shoes to fill, but if he follows in his idol’s footsteps, he will be just fine.