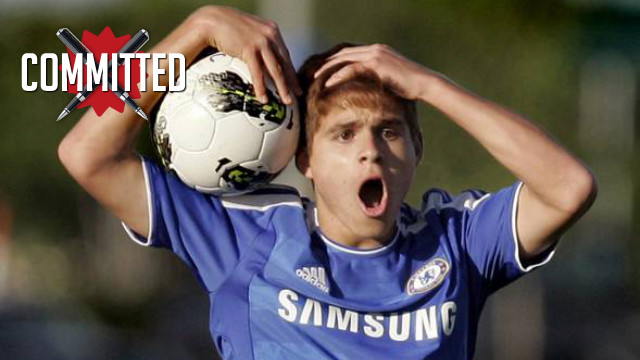 The who is Alan Winn. The what is his verbal commitment to North Carolina. The when is last Saturday when he informed the Tar Heels. The how is where it gets interesting.

Winn, 17 years old, was one of the main contributors to the U.S. U17 Men’s National Team for the past year. The speedy winger appeared in two of the three games at the 2013 U17 CONCACAF Championship including starting the opening game, which was a 3-0 win over Haiti.

The teenager’s prominence on the squad obviously drew the eye of coaches from the top universities across the country, which made his recruiting process one of the most contested for the class of 2014. 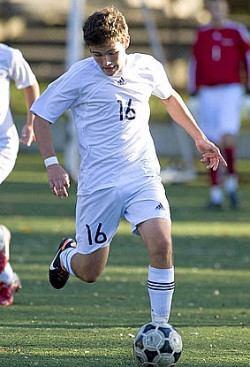 Excluding the players who already signed professional contracts, Winn was the top ranked uncommitted player until he gave his word to the Tar Heels.

“The coaching staff, facilities and a winning tradition pushed my decision toward UNC,” Winn told TopDrawerSoccer.com. “The moment I stepped on campus I felt very comfortable. The Tar Heels are in one of the strongest conferences in the country and the development toward players over the past years has been very successful. I feel UNC will develop me as a player and person the best.”

It is hard to argue against the esteem of the UNC program, but the commitment still came as a bit of a surprise as Winn’s father, Jimmy, is a sergeant with the SMU police department.

The Ponies did make it into the consideration as one of Winn’s top four schools (along side UCLA and Wake Forest), but the allure of wearing the Tar Heel Blue trumped all for Winn.

The hard-nosed Texan also said that he gained a lot from his experience at the USSF Residency Program in Bradenton, Florida.

“My experience at Residency exposed me to many different styles of play,” Winn said. “It helped me recognize and adapt to different situations in games.

“The biggest take away included the every day training, eating healthy, weekly mental conditioning meetings. Florida really gave me the sense of what a profession life would be like. Ultimately if you want to become great at a sport, it takes passion, dedication and hard work every single day.”

Winn will join the Heels next fall. For now, he is focused on his club team, which advanced to the Development Academy Finals Week last week. The future Tar Heel scored three goals in the final two games at the Playoffs in Frisco to propel his team to the top spot in the group and the trip to Houston where his club will look for its first Development Academy National Championship.

The addition of the goal-scoring winger certainly raises the profile of the Tar Heels 2014 class, which includes James Pyle, Evan Krause, and fellow Texan Andy Lopez at this stage.

After a dream 2012 season, it’s no surprise to see another quality prospect join Georgetown for its 2014 recruiting class.

“I decided early in my process that I wanted to go to a top quality soccer program that will help me develop as a player, a top quality academic institution, and most importantly, a place that I can be happy at,” he told TopDrawerSoccer.com. “Georgetown felt like the perfect place, offering all of these attributes.”

The soccer team’s run to the national championship in 2012 probably didn’t hurt, although there was a lot about the soccer team that caught his attention.

“There are a lot of aspects of the soccer program that influenced my decision to attend Georgetown,” McCabe said. “First of all, coach [Brian] Wiese and his staff made me feel extremely welcome, and they play in a way that I am excited to contribute to. Secondly, Georgetown plays in the Big East, which in my opinion is a top conference in college soccer today. Playing professionally is one of my ultimate goals, and with the talented coaching staff and team we will have, I believe it is an achievable goal. Lastly, all of the players I met on my visits to the school made me feel welcome.”

The Revolution midfielder is the fourth member of the 2014 Georgetown recruiting class, joining Arun Basuljevic, Christopher Lema and Matthew Ledder.

The opportunity to join a program that offered both a world-class education and an ambitious Division I team helped Yale land the commitment of Theodore Miller.

“My decision had a lot to do with my positive feelings about Yale's coaching staff,” Miller told TopDrawerSoccer.com. “Coach Tompkins and his staff are smart, experienced coaches who made me feel very welcome at their program. I look forward to the opportunity to be a part of the future of Yale Soccer.”

Miller is also looking forward to the challenge in the classroom as well, not to mention a proximity to home

“The school itself is a great fit for me,” he said. “I am honored to be attending an institution with such a long tradition of academic and athletic excellence – and it's just a few hours on the train from my home in Brooklyn so my family can still make the games.”

Defender Trey Thomas (HMMS Eagle FC) committed to Brown for the class of 2014.

Midfielder Pablo Pelaez (San Diego Surf) committed to UCLA for the class of 2015.

Defender Spencer Kopko (Revolution Empire) committed to Syracuse for the class of 2014.

Midfielder Marcos Arroyo (Orlando City YS) committed to Army for the class of 2014.

Goalkeeper Brady Mazzei (Annandale Knights FC) committed to Liberty for the class of 2013.