Unison is reached in Canadian defeat 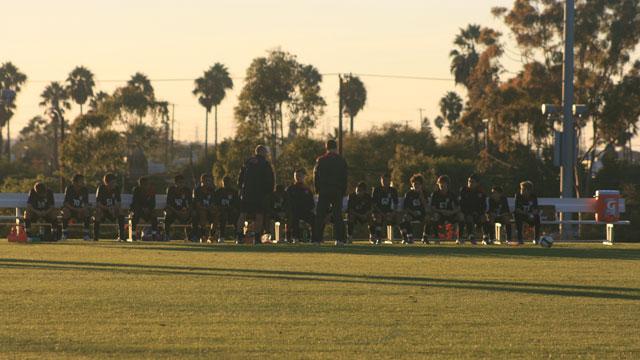 The U.S. U15 BNT training camp concluded Saturday evening with the last double-header of scrimmages, rematches against Cosmos Academy West U16 and the Canada U15 National Team.

An embarrassing 5-2 loss to a U16 team from Cosmos was followed by some relief as the later game saw a 2-1 come-from-behind victory over Canada.

“We felt that there was a lack of competition that troubled us a little bit,” U.S. U15 Head Coach Jerry McKeown said. “Maybe it was fatigue, being the end of camp, or the disappointment of not being chosen for the international game, we just didn’t play well, we didn’t compete. We were beaten by a very good team and the score was ugly.” 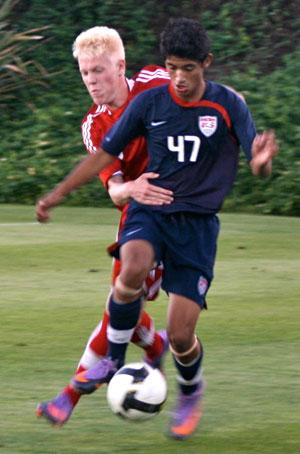 The U15 BNT competes against Canada.
The second game was more of a breakthrough performance for the U.S. After a slow first half that saw the U.S. team give up the lead to Canada, the American boys finally settled in and demonstrated the soccer that one expected through the training camp process, with help from some substitutions made at halftime.

“The subs really made a difference with fresh legs,” McKeown said. “These guys are good players, very technical, and had some pace.”

And the two subs that made the impact were Wilfred Williams and Joab Santoyo.

Playing as a midfielder, Santoyo was able to put a lot of pressure on the Canadian backline, recovering balls in the U.S. offensive third and causing several dangerous chances. He had a lot of speed and overall just outhustled his counterparts in the second half.

As for Williams, he had the biggest impact, influential in both of the U.S. goals, while scoring the game-winner.

As the U.S. was knocking on the door of the Canadian goal, Williams recovered a ball in the midfield, drove up taking his defender on and wisely laid off a perfect ball to Jorge Calix, whose low driven shot swept past Canada’s keeper.

As the U.S. mounted more pressure, Wesley Wade stole the ball deep in Canadian territory, turned his defender, and sent a cross into the 18-yard box. Williams came rushing in and poked the ball away from the keepers grasp into the back of the net.

“In the center of the park, the guys were plugging away and started connecting passes instead of playing forward balls that didn’t always add up,” McKeown said.

The back line should also be commended for its performance against a Canadian side that previously tore through the American defense. Elijah Martin and Theo Miller did a good job in disrupting the attack from the flanks and moved efficiently up and down the sidelines as an avenue of attack.

Vernon Bailey played a good match at center back and was able to utilize his strength to knock players off the ball and held on to it whenever needed.

Earlier, Emerson Hyndman, Cesar Alba, and Adonis Amaya made their presence felt against the Cosmos by being involved in the two goals.

Amaya pulled off his man and got some big air to get high and blast a header off Cesar Alba’s cross. Later in the game Hyndman connected with Cesar on a quick give-and-go from the right side of the 18-yard box that freed Emerson for the strike to the opposite side of goal.

“We saw positive things in a lot of the players that participated in the games and a lot of guys have things that we really liked,” McKeown said. “From that, we will step away from the game and make our assessment a few days later when we look at their whole body of work.”

Now that training camp is all said and done, it is time for players and coaches to soak in everything that has been taught and learned. This group of players had the luxury to be the first in their age group to be chosen to prove whether they can keep up and play with the best.

“We touch on a lot of points they may not see in the club level in terms of responsibility, both defensively and collectively, making them comprehend that when you get a group of guys like this, how the game gets so much faster,” McKeown said. “To have ideas before the ball comes rather than having time and space, so that those ideas are formed prior to the ball coming, leads to better execution when they have one or two touches, making the game faster.”

More importantly is for these players to take what they have learned and implement it on a daily basis so that when the next camp comes around, they’ll be ready. However, as Coach McKeown told the kids in the after-game speech, the team will look at other players in upcoming camps. He strived to make these kids understand that if they are not called up next time, it doesn’t mean that their playing days are over, nor does it mean that they have arrived if they do.

“We are looking to find the best players ultimately in the country and get a group that we feel really good about,” McKeown explained. “That group would be the one that proceeds on to residency.”