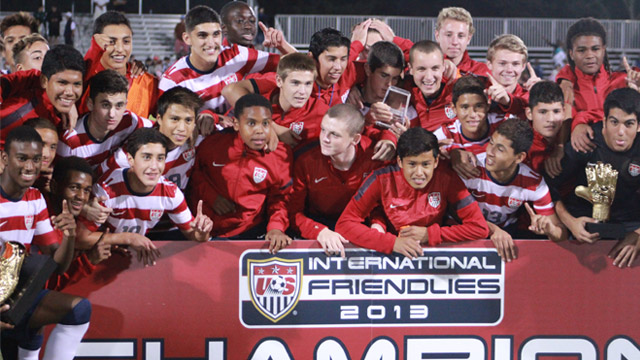 LAKEWOOD RANCH, Fla. — The U.S. U17 team started the Nike International Friendlies on Monday with a brutal extra time loss. The Americans finished the competition on Friday as the event’s champions for a second time in three years.

Bizarre ending and all. 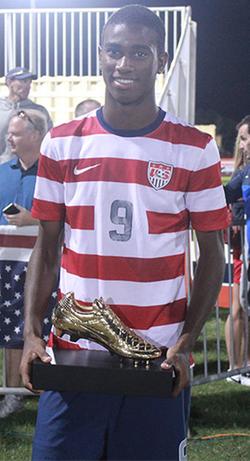 The U.S. U17 MNT rocked back Brazil on the final match day Friday, sprinting to a 4-1 victory that bookended Portugal’s title here last year with U.S. titles in 2011 and now 2013. The game ended in mystifying fashion after Brazil received its second red card with about five minutes left in the match. The Brazilians came out of the break inert, refusing to move past midfield as the U.S. passed around at the back. Finally, the U.S. simply sat on the ball for the final few minutes until the ref ended the game without adding stoppage time.

The U.S. entered Friday needing help from England just to have a chance, and the English delivered with a 4-3 win over Portugal earlier in the day. That made the final game of the Nike International Friendlies a de facto title game, with the U.S. needing a win to hop Brazil in the standings and secure the trophy. Brazil needed only a draw to win the title.

Forward Haji Wright was the man of the moment with five goals over three games in Florida, which won him the event’s Golden Boot trophy. He scored the U.S.‘s only goal against Portugal and then registered two goals each in a 5-1 win over England and Friday’s 4-1 win. Central attacking midfielder Christian Pulisic, who also scored in Friday’s win, took home the Nike MVP award after a rampantly creative display.

They certainly got help from a partisan crowd, which packed into the main showcase field at The Premier Sports Complex by the bucket loads. Players from the dozens of teams in town for the Development Academy Showcase created a raucous standing room-only environment that ringed the boards surrounding the field and was firmly in the Americans’ corner.

But the game was not without its oddities, and no moment was stranger than the end of the match. With the U.S. firmly in control, Brazilian midfielder Caique da Silva cut down Pulisic and was given a straight red with about five minutes to play. Da Silva’s exit was Brazil’s second after Jaqueson was sent off in the 40th minute, and Brazil protested by refusing to play out of the rest of the game. The U.S. first kicked the ball around at the back a few times before realizing the Brazilian front line wasn’t crossing the midfield stripe. At that point, the U.S. simply put the ball under heel and let the final few minutes run out with no movement.

That prompted both amused and frustrated calls from a puzzled crowd, and even some of the U.S. players could only laugh.

“I guess they didn’t want to play anymore,” Wright said with a wide grin.

For U.S. U17 coach Richie Williams, it was a frustrating way to end a game the U.S. thoroughly dominated and deserved to win.

“I think that was absolutely ridiculous by Brazil,” Williams said. “Those were two 100 percent red cards. They were bad tackles.”

The U.S. came out energized, and the team nipped the first goal in the eighth minute from the foot of Wright. Right back Matthew Olosunde skipped past a tackle to start the move, and he shuffled it off to a streaking Wright, who stepped through a tackle, past a defender and blasted home from about 15 yards. Not to be outdone, Brazil equalized eight minutes later via striker Marcelo da Souza after he rounded keeper Kevin Silva.

From there, the U.S. assumed full command. In the 22nd minute, Joe Gallardo knifed into the area on a Pulisic corner and whacked at a volley that struck a defender’s shins. From his back, he hit it again and it squeaked through to give the U.S. its lead.

That’s the way it stayed into half, but Brazil’s red card just before the break meant the U.S. pinned its ears back and roared forward over the final 45. About 10 minutes into the half, the U.S. capped an uninterrupted spell of three minutes on possession when Gallardo, who had a hat trick on Wednesday, got free on the left and centered for Pulisic, who only had to redirect it in for a 3-1 edge.

“They were smart (about) when to try to build in quick combination play but also times to maybe play in behind the back four,” Williams said. “There was a good balance, so we were able to get at them.”

For the fourth, Gallardo popped up again in a dangerous spot and released Wright into a leftward channel inside the box. Wright took a few touches and whipped his shot far post, beating the keeper for a 4-1 advantage. That allowed the U.S. to coast to a title on a night to remember.