During its stay the team played a handful of European clubs, beating Celtic F.C. and Manchester City with a 3-1 and 4-1 score, suffering a 2-1 loss at the hands of Everton F.C.

“I think overall the team was very good and well balanced. We had good options in every position,” he said. “We didn’t have any training before, so the kids performed exceptionally well and came together as a team very quickly. By the end of the week they were solid.”

It wasn’t the perfect start for the Selection team. In its first game, Celtic went up 1-0 after a penalty kick. 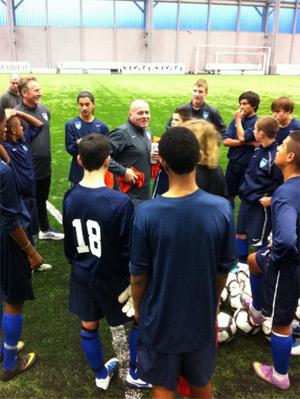 Coach Gerry McKeown addresses the squad.
However three unanswered goals by Sam Swanson, Shannon Seymour, and Benny Swanson helped the team overcome the deficit and come away with the victory.

“That was huge, particularly since they were down a goal. But that was the challenge, how to be able to respond to that and trust your own ability,” McKeown said. “We really enforced into them that they have the ability. They came together to trust each other and played without getting desperate.”

The second match saw Everton get the game-winner off a set piece after the teams were deadlocked at 1-1.

“If the team would play Everton again, the result could be different,” McKowen said. “They were able to create a lot of chances against Everton.”

After playing a Thursday night game, the team had a short time to recover for its morning bout against Manchester City.

The time span was apparently more than sufficient as Chet Castellaw and Stephen Elias each buried two goals for the 4-1 win.

“Stephen grew as the week went on. He wasn’t featured in the beginning, but we gave him some specific roles. By the end it brought fruition, creating a lot of chances,” McKeown said. “Chet was very dangerous holding up the ball and having a bigger physical presence than the opponents.”

The trip wasn’t just successful for the team, but individually for players who received positive reviews by visiting coaches.

Collin Fernandez, Jeremy Colvin, Tommy Redding, and Logan Panchot were some other recognized players from the National Select team.

Fernandez played at left back and, according to McKeown, had great technical ability to take people on and made a number as smart runs going forward. Colvin played in holding midfield position and facilitative the backline to play out. He was the link between the defense and front line.