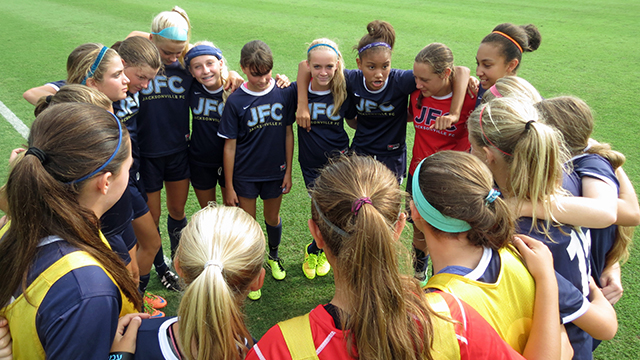 GREENSBORO, North Carolina – Riverhounds Development Academy's U16 girls caught a break early in its 1-0 victory Friday over CentCal Dynamo 2016 on the opening day of the National Cup XIII Finals.

An own-goal by the Dynamo turned out to be the only point in the U16 Girls Super Group match at the Bryan Park Soccer Complex, and gives Riverhounds (1-0-0, three points) – most of whose players were on the National Cup XII Finals U15 Girls Super Group championship team last year – an early advantage heading into its round-robin match Saturday against Crew Juniors Gold (0-1-0).

However, Riverhounds head coach Scott Gibson won't be around to see it – he was ejected near the end of the second half after complaining about the amount of stoppage time being played.

After two warnings from the center judge, Gibson was asked to leave, meaning that he will not be able to coach in Saturday's match against Crew Juniors Gold. Gibson had no comment after the match.

The Riverhounds took the lead in the 16th minute the first half thanks to a Dynamo miscue, with defender Christina Monreal – possibly distracted by the approach of Riverhounds forward Shawna Zaken – directing a crossing shot into the Dynamo goal instead of clearing it.

Adam Yingling scored for SCPASA Lions Gold, and its defense made a late One 7 Academy rally fall short in their U16 Boys Super Group round-robin opener Friday.

Yingling put Lions Gold (1-0-0, three points) ahead when he connected on a free kick from 25 yards out in the 37th minute of the first half. A own goal by One 7 Academy defender Oscar Castro Contresas – possibly distracted by Yingling – at the 59th minute then staked SCPASA to a 2-0 lead.

However, One 7 Academy (0-1-0) broke the shutout five minutes when Charles Basse shook off three defenders and put a shot past Lions Gold keeper Jake Graybill.

Ryan Wittenbrink and Austin Ehren each had one goal and assisted on a second, and Josue Infante added a goal as Libertyville FC opened round-robin play with a solid win Friday over East Brunswick SC United.

Wittenbrink put Libertyville FC (1-0-0, three points) ahead early with his goal in the sixth minute. He got past the defense, only to have his initial shot stopped by United keeper Victor Roccki, who slid out to challenge. But Roccki lost the handle on the ball, with Wittenbrink scooping up the loose ball and putting it into the empty net.

East Brunswick (0-1-0) tied the match at the 18th minute on Kevin Senkus' breakaway goal from 15 yards out, but Infante put Libertyville FC ahead 2-1 at the half when he put Ehren's crossing shot into the net with less than 30 seconds remaining in stoppage time.

Ehren then gave Libertyville FC an insurance score at the 44th minute, putting his own rebound shot past Roccki off a high cross from Wittenbrink.

Jennings broke free on a breakaway and punched a shot just above Jacksonville FC keeper Claire Cywes' head. Cywes got her hands on the ball, but it slipped out and into the goal.

Jennings' score ended a three-goal run for Virginia Rush FC (1-0-0, three points) over a 10-minute span late in the second half.

Down 4-2, Jordan Farley put in a crossing shot from teammate Ashley Euerle at the 55th minute to pull Virginia Rush FC within a goal. Five minutes later, Carly Wyatt tied the match when she scored on a breakaway.

Abigail Faro had two first-half goals for Virginia Rush FC. Her freak goal – a high blooper that bounced over Cywes' head – at the 18th minute gave them the initial lead, and her rocket from the right side at the 33rd minute tied the score 2-2.

However, Jacksonville FC Elite (0-1-0) would respond each time. Sarah Brunner scored close in at the 25th minute to tie the match, Rylee Forster put in a rebound four minutes lateer to put them up 2-1, and Carri Sturm put in a crossing shot at the 34th minute for a 3-2 halftime lead.

Jacksonville FC Elite would then pull ahead 4-2 on Abigail Pohl's goal at the 52nd minute of the second half.