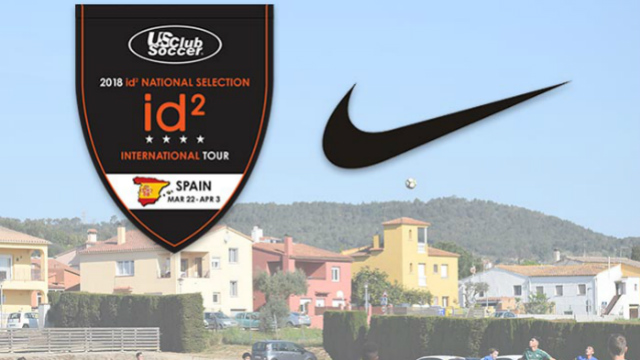 by US Club Soccer

US Club Soccer – a prominent member of the U.S. Soccer Federation and the leading organization developing soccer clubs across America – today announces members of the 2018 id² National Selection International Tour will travel to Spain, March 22-April 3, for a multi-faceted experience highlighted by participation in the 18th annual Mediterranean International Cup (MIC).

The id² Boys Program director Gerry McKeown will lead the team in the id² Program’s ninth trip abroad. Logan Calpito (formerly of Rush Hawaii) returns from the 2017 id² National Selection team. Last year’s team advanced to the quarterfinals of the MIC – the best tournament finish by a U.S.-based team, according to MIC officials.

“It is a unique opportunity to expose our players to games that have consequence,” said McKeown. “At this age, our young players do not play enough elimination games. It will be challenging for them playing against great international clubs when the performance actually counts. In this tournament, if you underperform, it will result in an early departure or more beach time.”

Consistent with US Club Soccer’s philosophy that identification and development should be free to players, the organization is fully funding the trip in conjunction with strong support from Nike. The id² Program is an Olympic Development Program approved by the United States Olympic Committee and U.S. Soccer Federation.

In addition to Nike, LaLiga is offering its resources to enhance the 2018 id² National Selection International Tour. Premier International Tours is also assisting with travel logistics, and, like previous years, is serving as on-site liaison for the duration of the trip.

Players are selected based on extensive scouting and participation in the id² Program cycle targeting boys born in 2004, which included several Player Development Program (PDP) events and three id² Training Camps held in 2017.

US Club Soccer’s id² Program previously toured Spain in 2012, 2013, 2016 and 2017, playing games against the likes of Atlético Madrid, FC Barcelona and Real Madrid.

In the nine-year history of the international tour, US Club Soccer’s id² National Selection team has played a collection of friendlies against top academy teams. Participation in the 2017 MIC represents the second consecutive time the id² team will play in a tournament.

In addition to competing in one of the best competitions in the world, this year’s group will be immersed in a multi-faceted experience on- and-off-the-field that also includes watching professional games, training in some of the country’s best facilities and enjoying cultural immersion through sightseeing excursions.

About US Club Soccer

A National Association member of the U.S. Soccer Federation, US Club Soccer fosters the growth and development of soccer clubs in order to create the best possible development environment for players of all ages.

US Club Soccer is sponsored by Nike and supported by LaLiga through a technical partnership.