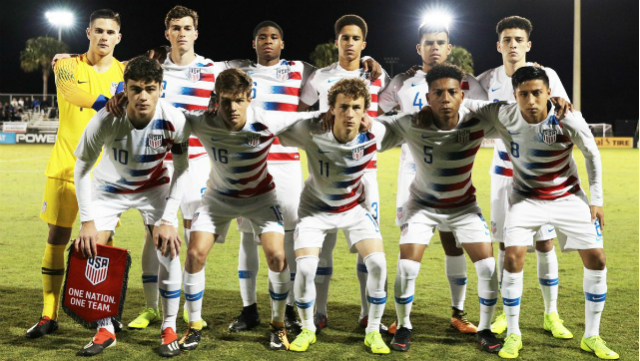 The U.S. Under-17 Men's National Team began the 2018 Nike Friendlies with a 1-1 draw against Portugal on Wednesday night at Lakewood Ranch, Florida.

D.C. United Academy forward Griffin Yow put the United States out in front in the 36th minute. Pouncing on a poor back pass from a Portuguese center back, Yow kept his calm and slotted home the opening goal.

The goal came in the wake of the United States absorbing pressure from Portugal in the game's early stages; starting goalkeeper Damian Las saved an early header in the sixth minute that also required a goal-line clearance from Adam Armour. The United States grew into the game as the first half progressed, and were rewarded when their high press forced the mistake from Portugal. Alfonso Ocampo-Chavez nearly made it 2-0 in the 39th minute, curling his left-footed effort just wide of the post.

After the U.S. were unable to extend their lead in the second half, Portugal tallied the equalizer in the 81st minute. Portuguese winger Gerson Sousa beat U.S. right back Joseph Scally, and his cross found the feet of Tiago Tomas, who slotted home the tying goal.

Substitute Cameron Dunbar had a late chance to win the game for the United States when he broke through in on goal in stoppage time, but Portugal goalkeeper Samuel Soares stood strong and turned aside his would-be winner.

In the day's earlier match, Brazil beat Turkey by a 1-0 score, putting them in first place after the opening round of matches. The United States return to action on Friday night (kickoff time at 6:30 p.m.) against Turkey.