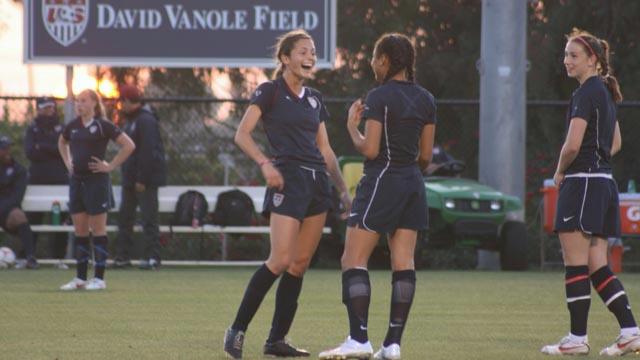 The buzz at U.S. headquarters in Sunshine, Florida, was the international flavor making its way in for a few high quality matches.

The U17 group, which occupied the facilities from Aug. 14-21 capped their camp with two friendlies against the U18 Chinese National Team. The Americans probably should have captured both matches but settled for a 1-0 victory Aug. 18 and a 2-2 draw Aug. 20.

Midfielder Kaili Torres notched the winner in the opening match and Dickey described the Aug. 20 matchup as one that got away – and for good reason.

The U.S. squad established a 2-0 lead on scores from Kaysie Clark and Morgan Brian before allowing two second-half goals. The equalizer came in stoppage time on a free kick that even the great Abby Smith didn’t have a chance on. 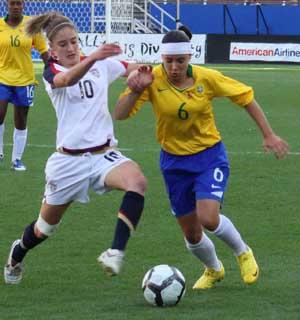 Morgan Brian competing against Brazil.
“We definitely should have won,” Dickey said. “We had a foul in the stoppage time that decided it, but it was a great opportunity for us to play against a team the girls could end up seeing in the U20 cycle.”

The U15s received a similar opportunity of global challenge, with less successful results.

The Americans fell 1-0 to the U17 South Korean National Team before taking a 2-0 defeat to the U17 Nigerian squad.

What Dickey’s group lost in match outcome, it most certainly gained in lasting lessons. The international teams brought a new brand of soccer that challenged the national team in new ways and forced them evolve.

“It’s about being more savvy,” Dickey said. “Sometimes it’s about knowing how to take away individual players  - (the international teams) certainly showed some individual stuff our players could not pull off and don’t see much of at home.”

In the match against Nigeria, the U.S. team was pushed tactically.

“Nigeria was really squeezing us and pulling us offside,” Dickey said. “We had a lot of chances but we didn’t know how to adjust, and didn’t time the pass at the right time so we lost those chances.”

In defense of the U15 team, it was a group that featured seven new faces. Tune in tomorrow for Part Two where we’ll detail the new national team additions, and how they fared individually.