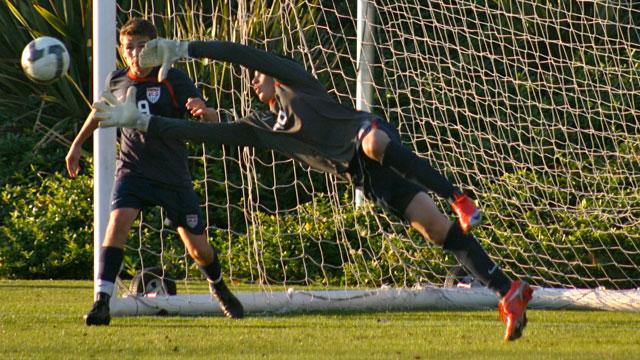 CARSON, CALIFORNIA -  The United States U15 Boys National Team has convened at the Home Depot Center for a weeklong training camp. Tuesday was the group’s first test as they faced off against the New York Cosmos Academy West U16.

The U.S. controlled the run of play in the early stages of the game, but dropped off toward the latter part of the half. Cosmos were then able to control the ball in the midfield and offensive third, repeatedly out-muscling U.S. players for the ball. 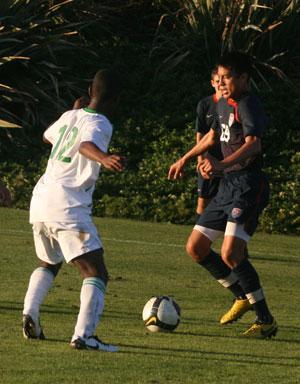 U15 BNT vs Cosmos
“I thought we did pretty well in the first 20 minutes. We were moving the ball very well and then they were on top of us for a good stretch,” U.S. Assistant Head Coach Bryan Scales said. “Eventually they got a goal.”

The eventual continuous heavy attack from Cosmos broke down the U.S. backline and allowed theCosmos to go ahead 1-0.

The second half was much of the same, with Cosmos dominating possession and pushing the U.S. back on its heels. There wasn’t any surprise in the Americans' play since the squad had only been together for two days.

A miscommunication between the center backs and the goalkeeper allowed Danya Kafai to toe-poke the ball into the Cosmos’ empty net.  A few minutes later the U.S. gained the lead with a well-placed corner kick by Rory Slevin headed in by Arturo Paz, who streaked into the 6-yard box untouched, for the eventual 2-1 winner.

“Rory made a good decision and it was a well served ball,” Scales said. “Kevin just timed his run in the right way. It was a good goal.”

Several players made a good impression in the first scrimmage of camp, none more than Corey Baird. The midfielder covered a ridiculous amount of ground, cutting off passes, and being the point of attack for the offense. There still needs to be better communication between him and the forwards, which comes with training. Once that occurs he will demonstrate his lethal threat.

“I thought Corey did well, he covered a ton of ground. He is a box-to-box midfielder and he did that tonight,” Scales said. “He defended at the top of our box and then he was getting in the opponents box, running at them with the ball. He had a good night.”

Others who had notable performances are Patrick Khouri, who played in the back line, and Joab Santoyo, whose speed blew by Cosmos defenders several times. He also had great vision of the field and took advantage of any open space that was given to him.

Carter Manley and Rubio Rubin did a great job on the right flank. Aside from the Cosmos goal that came from that direction they were able to shut down that side and prevent any serious threats.

“I thought everybody made a good account of themselves tonight. This is a process and it’s the beginning of the week,” Scales said. “We will evaluate and see how guys are in the middle of week. But for the first game, I thought the guys had great performances.”