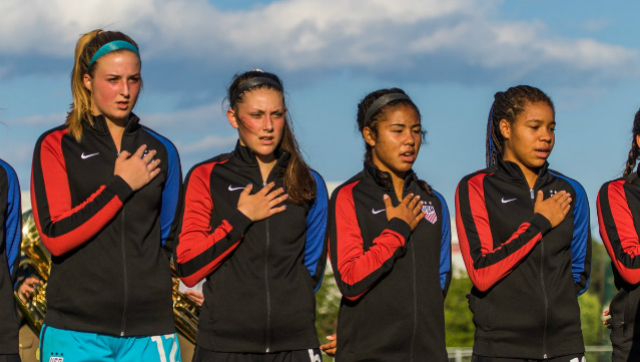 U.S. Under-17 Women’s National Team head coach Mark Carr has named the 20-player roster for the 2018 Concacaf U-17 Women’s Championship to be held in Managua, Nicaragua from April 19-29. The tournament will send the top three finishers to the 2018 FIFA U-17 Women’s World Cup being held in Uruguay from Nov. 13-Dec. 1.

The cut-off date to be eligible for the upcoming U-17 Women’s World Cup is players born on or after Jan. 1, 2001. Carr chose 17 players born in 2001 but also included three players born in 2002. Carr named the roster after a 10-day training camp in Lakewood Ranch, Florida, that featured three matches against the Japan Under-17 WNT. The USA drew the first game 0-0 and then won the next two, 4-1 and 2-0.

“The decision of the final World Cup qualifying roster certainly was not easy,” Carr said. “Our coaching staff and I deliberated for days, right up until after our final game with Japan. The credit goes to the players for how they have pushed each other to this point and made the final roster decisions very difficult. It’s never easy to tell players they aren’t in the squad, but my hope is that all our players respond with a positive reaction and know that this is something they must commit to daily. Having now selected the roster, we feel good about the group that will represent our country in Nicaragua.”

Two players who participated in the 2016 Concacaf Women’s U-17 Championship, which the USA won while earning a berth to the 2016 FIFA U-17 Women’s World Cup, are on this year’s roster in defender Kennedy Wesley and forward Kate Wiesner.

The Americans have been seeded into Group B at the 2018 Concacaf Women’s Under-17 Championship, where they will face Costa Rica, Bermuda and Canada. The USA opens the tournament on April 20 against Costa Rica, faces Bermuda on April 22 and will play Canada on April 24 in the Group B finale. All of the USA’s group matches kick off at 10 p.m. ET (8 p.m. local).

Group A features host Nicaragua, Mexico, Haiti and Puerto Rico. After round-robin group play, the top two finishers in each group will cross over for the semifinals on April 27 with the winners of those games, along the winner of the third-place match, earning berths to the 2018 FIFA U-17 Women’s World Cup. The Championship and Third-Place matches are on April 29. Estadio Nacional in the capital of Managua will be the venue for all sixteen tournament matches played across eight matchdays.

More than half the field is set for the 2018 FIFA U-17 Women’s World Cup. Joining host Uruguay are Brazil, Colombia, Ghana, Cameroon, South Africa, Korea Republic, Korea DPR, Japan and New Zealand. Along with Concacaf’s three qualifiers, three more will come from Europe.