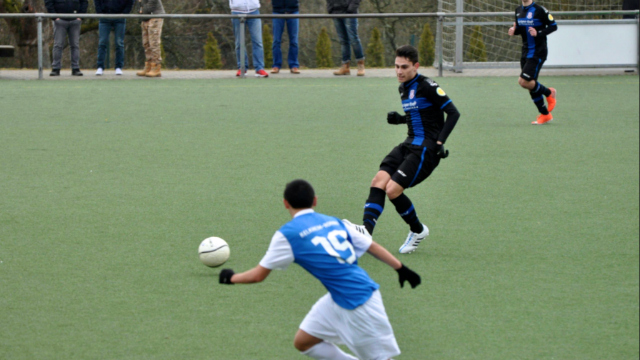 Christian Albelo is sometimes lost in the shuffle when it comes to youth national team prospects. The talented midfielder has bounced from club to club in Germany while his parents are relocated among army bases. Recently, he landed with FSV Frankfurt, where is a very promising addition to the 2. Bundesliga’s side’s academy.

“Well it has a lot do with my parents and their job in the military just like my move away from Hoffenheim did,” Albelo said about joining FSV Frankfurt. “Living in Europe as a part of the American Armed Forces, I have to abide by certain rules based on where my parents work. At Hoffenheim, I had to leave because they considered me to live too far away from my parents. I went to Kaiserslautern where my dad worked, but my dad decided this year that he would retire from the army and I was essentially in the same boat as before so I had to move back home. I found a good club in FSV Frankfurt that believes in my abilities and has big plans for me.”

FSV Frankfurt may have lucked into Albelo’s arrival, but they are taking full advantage of the exciting deep-lying playmaker.

“The season has been great so far,” Albelo said. “I've been playing a maximum amount of minutes and have been enjoying my time on the field and have been growing every day as a player and have been getting many great opportunities.”

Among those opportunities has been pushing Albelo up the age groups within the club to help him grow and feature him alongside older players.

His club has utilized him in all three spots in the midfield roles, but it appears the defensive midfield role is where he envisions his future calling.

“I play as a No. 6 where my role is to protect the back line but also create and orchestrate the field from a deeper lying position,” Albelo said. “From time to time, I am playing in a No. 8 or No. 10 position where I'm higher up the field and in more dangerous positions but I am loving and enjoying the No. 6 role.”

While he yo-yos from team to team within the academy, the club has spoken to the teenager about his future there and his path up toward the top tier. For now, his concern is improving every day so he can make that transition easier when the time comes for him to debut.

“The club has spoken to me about potentially coming into the first team in the future,” Albelo said. “For now, the main goal of the club is to make sure I develop mentally and physically in the youth ranks as best I can so I can make that jump to the senior team as soon as possible.”

His stock is climbing within the club, but the calls from the U.S. Soccer Federation have been there recently.

“The last time I have heard from the U.S. Soccer Federation was when I was in Mexico for the Copa Mexico de Naciones in 2013,” Albelo said.

Although the time difference made it difficult for Albelo to keep up with the recent U17 CONCACAF Championship, he did his best to watch when he could. He keeps in touch regularly with many of the players on the current U.S. U17 Men’s National Team squad. They were all a part of the U14 and U15 youth national teams a couple of years ago.

“I thought they did well with a lot of pressure on their backs and I was definitely happy for them when they qualified for the World Cup,” Albelo said.

Albelo’s options don’t end with the U.S. though. He has had some contact with Colombia and he is now a member of a regional squad in Germany.

“I'm currently on the regional team for Hessen here in Germany and will be going to a DFB id tournament in the summer,” Albelo said.

The lack of international games hardly matter at this point, as the youngsters club career continues to soar. Albelo is eyeing some lofty goals for 2015 as he keeps the good times rolling.

“For the next calendar year I have set the goal for myself to make the jump into the first team,” Albelo said. “Internationally, I have set no goals for myself for the time being and believe that if the chance to represent a national team arises itself then I will consider it, especially with the U17 World Cup coming up.”