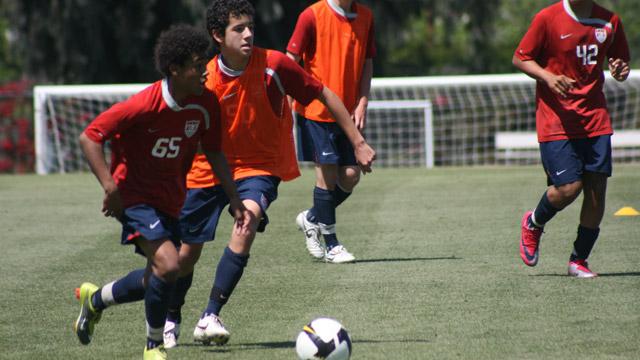 CARSON, California – And so they gather for a final time, the future once again present for a week of study and evaluation.

The U.S. U14s are back at the Home Depot Center for an all-important get-together that will mark the final meeting of the year for this group.

Coach Manny Schellscheidt has invited a slightly larger than usual group of 40, made up mostly of the same core that visited Carson last month.

The goal for this week is a simple one: it’s, well … goals. 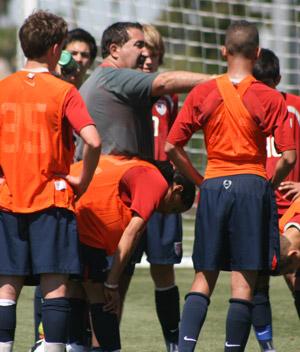 U14 BNT campers receive instruction.
“At this stage it’s more about the attacking end of the game than the defending end,” said Schellscheidt, following the team’s second training session of the week. “I think that’s (Senior National Team coach Bob Bradley’s) biggest concern, and everyone’s … it’s where are the goals coming from?

“We see all these games that are getting played from box to box but in front of the goal not much is happening. So I think this camp is titled more toward the talent then the organized part and structure.”

So with that, Schellscheidt will turn his young talent loose – to an extent – and try to find the players who have “it,” with “it” being whatever we don’t have enough of – primarily, whatever “it” is that produces goals.

A staple of every national camp is the emphasis on faster play, and quick, decisive decision-making. That in itself is part of the solution to producing more offense.

The boys got after it Monday during 11v11 short-field scrimmages that limited the players to just a couple of touches per possession.

U14 camp holdover Benjamin Swanson is further along in this respect than some of his peers. Swanson is very efficient with his touches in the midfield and showed great form all day.

Striker Marc Calderon is a forward who competes with passion and can be dangerous with the ball. He, along with all of his fellow campers, pushed the pace.

“We want to play fast,” said midfielder Coy Craft. “A lot of us are used to the way we play with our club teams so we’re just trying to cut down the passes and play good soccer.”

It’s more challenging than it sounds, particularly when the camp first starts and players arrive towing the baggage of all of their old habits.

“The first day you want to get out all of your mistakes, and after that you keep progressing throughout the week,” said defender Tommy Redding. “It gets easier after a while, you start getting used to the speed, you find people and get to spots faster.”

Hopefully, that includes the one spot in particular U.S. Soccer is looking to get to more frequently – the back of the net.