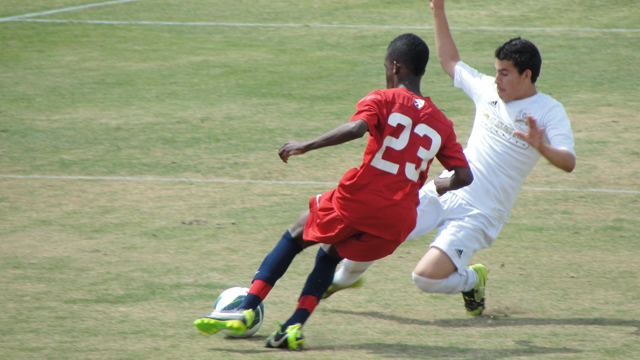 CARSON, Calif. – The path to the 2017 U17 World Cup squad has already started for the U.S. The U14 Boys National Team (players born in 2000) completed its third training camp on Saturday with games against FC Golden State and Cal South ODP. The youth national team was victorious against FC Golden State thanks to a pair of early goals from George Acosta and Andrew Carleton. The U14s battled to a 1-1 draw with Cal South ODP with the lone goal from Nicolas Morillo. 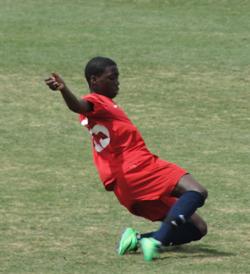 The U14s head to Croatia next as it marks the first international games for this group after previous camps in California and Florida.

READ MORE: U15 BNT ends camp with wins | Big test ahead for U15 BNT in Italy

George Acosta and Andrew Carleton both scored in the opening minutes and the youth national team looked like it was going to roll to a comfortable win on Saturday in the first game of the day at the National Training Center.

The offensive onslaught continued when Ayo Akinola redirected a shot into the back on the net in the 17th minute, but the assistant referee wiped the goal off the score sheet via his flag indicating that Akinola was offside when he directed a shot from Acosta into the net.

FC Golden State nearly had its first goal of the game in serendipitous fashion when Alexander Budnik’s clearance was blocked inside the 18-yard box. The blocked clearance hit off the post and Budnik jumped on the rebound.

Timothy Weah, who came on for Carleton in the first half after the goal scorer left with an injury, ripped an effort from just outside the box that skipped wide of the post.

Akinola remained hungry for his goal and pressed to grab one before half. The Toronto FC forward had a good look with five minutes left in the half but his effort from the top of the box went over the crossbar.

The U14s carried a 2-0 lead into the break and looked to be the more likely side to score early in the second half as well.

Acosta was again in the mix in the attack when he got on the end of a cross from Niccolo Lemoine. An FC Golden State defender prevented Acosta from scoring his second goal of the game with a goal line clearance.

Golden State closed the lead to one goal with six minutes left in the game when Jesus Hernandez headed home a cross from Kevin Aguilar-Cervantes.

The local club side pushed for the equalizer late, but goalkeeper Hunter Pinho came up with an impressive kick save in the final minute to preserve the win for the U.S.

They may be small, but they are ballers. The youth national team started the game with a midfield trio that had an average height of 5-2 and it only shrunk as substitutes entered the game.

Despite the diminutive status, the U14 BNT had a lot of success in controlling the ball throughout the game against a much larger opponent. The quick passing and sharp movements gave some flair to the contest, which had plenty of action from the opening whistle.

Jake Arteaga found the back of the net in the second minute when he headed home a cross from Tristan Weber, but the assistant referee’s flag neglected the tally from the center back.

The U.S. did take the lead six minutes later when Nicolas Morillo stole the ball from an ODP defender and then beat the keeper for the opening strike.

ODP answered seven minutes later with a nearly identical goal. A Cal South forward caught a U.S. defender in possession before burying the ball into the back of the net for the equalizer.

The game would end with a 1-1 score as neither team showed much bite in the attack for the rest of the game. The U.S. had some chances late in the game, but they were not much more than speculative efforts from distance.