U.S. U15 BNT ends camp with pair of wins 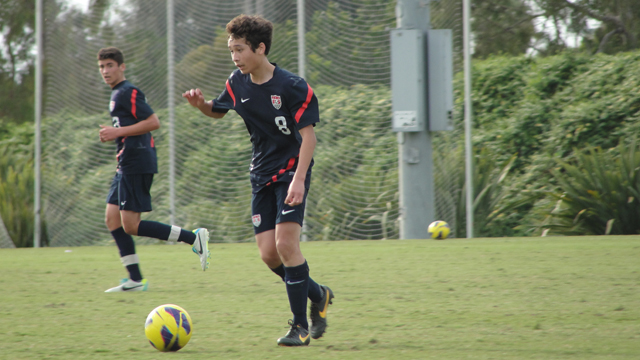 CARSON, Calif. – A pair of 2-1 victories was enough for the U.S. U15 Boys National Team to end camp on a high note and look forward to a trip to Italy next month against international competition.

The U15 BNT (players born in 1999) defeated FC Golden State and Cal South ODP ‘97s on Saturday as the coaching staff looked to cut the camp roster of 32 down to 20 for the upcoming trip.

Alec Zimmerman and David Portugal scored in the opening game against FC Golden State off assists from Hanif Wright and Harold Hanson. Nicholas Taitague found the back of the net twice in the later affair against Cal South ODP. 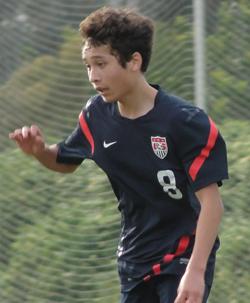 The U.S. jumped out to the early lead when Hanif Wright shifted into fourth gear and sped past the Golden State defense before delivering a perfect pass to David Portugal 10 yards from goal. The Chicago Fire Academy member smashed the shot into the upper corner of the net for the opening goal after only two minutes of play.

FC Golden State had a golden chance to pull back on level terms 10 minutes later when a forward burst through the U.S. defense, but FC Dallas goalkeeper Carlos Avilez provided the timely save.

Wright, again, took control of the attack with another mesmerizing run at the defense. This time, he was chopped down from behind, setting up a dangerous free kick opportunity. FC Golden State cleared the bouncing ball in the box from the ensuing set piece.

U.S. took a 1-0 lead into half in a game that the youth national team controlled from the start thanks to Orlando City’s Raul Aguilera, who played the No. 6 role in the 4-3-3 formation with one pivot.

FC Athletico’s Luis Arreola nearly doubled the lead for the U.S. early in the second half when he ripped a shot from just outside the 18-yard box. Arreola’s initial effort took a slight deflection and sailed over the crossbar.

The ensuing corner kick resulted in an ambitious side-volley from Luis Carrillo that the FC Golden State goalkeeper parried away for another corner kick, which was cleared from danger as well.

The U.S. did not wait long to double the lead though. Harold Hanson’s charging run forward from the right back position resulted in a perfect cross to the far post, which Seattle Sounders Academy member Alec Zimmerman directed into the net for a 2-0 lead.

FC Golden State amped up the pressure following the second goal and had a couple of chances to close the gap on the youth national team. In the 56th minute, the local club side saw a shot hit off the crossbar.

Six minutes later, the U.S. defense was out of sorts and a simple touch from an FC Golden State attacker beat both of the center backs. The forward finished under Avilez and made it 5-1 with 18 minutes left in the game.

The U.S. settled into the game following the goal and came close to restoring the two-goal advantage minutes later. Substitute Jonathan Filipe turned his defender like a doorknob at the top of the box and then chipped the keeper from 8 yards out. However, an acrobatic clearance from a recovering FC Golden State defender kept the ball out of the net.

The youth national team saw out the final 14 minutes without incident and secured the 2-1 win.

Nicholas Taitague’s two-goal performance highlighted a masterful showing from the youth national team on a night where Hugo Perez’s side controlled the possession for a large chunk of the game.

Despite the U.S.’s success, it was Cal South with the early lead when the squad capitalized on a defensive miscue from the youth national team and grabbed the early lead after 19 minutes with a smashing effort from only a few yards from goal after a misplayed pass across the defense.

The youth national team quickly responded though when a cross from Gabe Kash bounced off the hand of a Cal South defender. The referee awarded a penalty kick, which Taitague buried into the lower corner of the net.

Kash was again in the thick of the action 10 minutes later when his cross found the head of Jonathan Gonzalez inside of 12 yards from goal. Gonzalez’s effort went wide of the post though and the team remained 1-1 at the half time break.

Cal South had the golden chance to take the lead early in the second half when an attacker broke free of the U.S. defense on a cross and had an open header on the far post. U.S. goalkeeper Eric Lopez made himself into a brick wall and swallowed up the shot in his torso.

While the U.S. dominated the possession for much of the second half, the chances were few and far between. Substitute Marty Raygoza had the best chance, but the Cal South goalkeeper made a nice save on his effort from only a few yards out.

In the final minute of the game, Taitague took matters into his own hands and sliced through the defense before laying off the ball for Raygoza. The attacker from FC Golden State beat his defender and then cut back to Taitague who place his shot inside the far post for the game-winner.

“We had to score, we all were fighting in the end,” Taitague said about his effort to close out the game. “I knew we had to push through at the end. I’m glad we came out with it.”