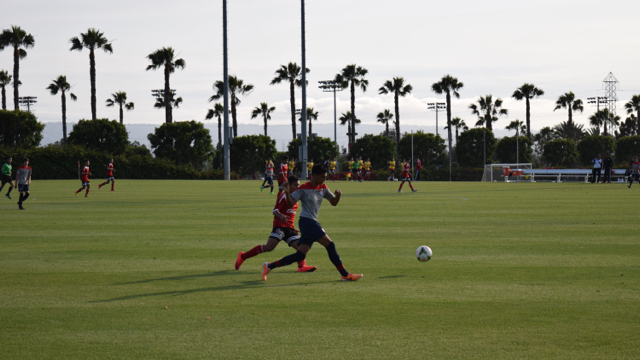 CARSON, California - The U.S. U14 Boys National Team was split into two squads on Thursday for a pair of scrimmages against Club Tijuana (2000s) and Cal South ODP (1999/2000s). The U14s had some positive moments in the games, but also had a few moments that will serve as lessons for the future.

Check back on Monday for a recap from the game between the youth national team and the local ODP side.

Santa Rosa United’s Luis Arriaga scored the lone goal of the game for the U.S. in the third minute. The sequence started with a long ball into the path of Jose Rivas. The winger picked out Gabe Segal with a driven pass into the 18-yard box. Segal played it Ulysses Llanez at the far post. Llanez cut to his off foot, which sent the final defender and the goalkeeper the wrong direct. He then laid it off to Arriaga for the tap-in.

The U.S. had a couple more chances in the first half with Arriaga proving to be a difficult mark for the Club Tijuana defense. Left back Julian Hinojosa provided the service for his second attempt, which came from 10 yards out. Arriaga hit it on the half volley, but the Xolos goalkeeper made the save.

In the 29th minute, Segal was chopped down a few yards outside the 18-yard box setting up a dangerous free kick opportunity for the youth national team. Lane stepped up to take it and sent it over the wall and dipping down, but it did not get down quickly enough and hit off the crossbar. Center back Dom DeAlmeida had a chance at punching home the rebound, but his header went wide of the goal.

Xolos’ one good chance of the first half came minutes later. A Club Tijuana midfielder saw U.S. goalkeeper Alex Rando a step off his line and tried to beat him with a high arching shot from 30 yards out. Rando did well to recover and tipped the shot over the bar for a corner kick.

The lead for the U.S. quickly dissipated in the second half when Club Tijuana jumped on the hosts in the opening seconds. Xolos picked apart the U.S. defense with a quick passing movement forward and put in the equalizer from close range.

The goal came partly due to a clever movement from Tijuana but also due to the changes made at halftime for the U.S. These camps serve as an opportunity for players to showcase their qualities so the coaching staff needs to see them in these games. These types of goals happen when players are still getting adjusted to new faces around them and the other team can strike quickly off the whistle.

The U.S. settled into the second half a bit and limited the chances for Club Tijuana after that goal.

Arriaga nearly spurred on the U.S. for the game-winner midway through the half when he linked up with Matteo Ritaccio in the center of the field. Ritaccio played a great entry pass over the defense and into the path of Arriaga. The Santa Rosa United standout played a one-touch pass to Rivas, who made a great run off the ball, at the top of the box. Rivas’ shot went wide of the mark.

The final chance of the game came with 11 minutes left when Club Tijuana picked off an errant pass and tried to hit on the counter. The Tijuana forward ripped a shot from the top of the box, but John Pulskamp made a good diving save to keep it out.

The game ended in a 1-1 draw. The U.S. returns to action on Saturday with an intersquad to wrap up camp.