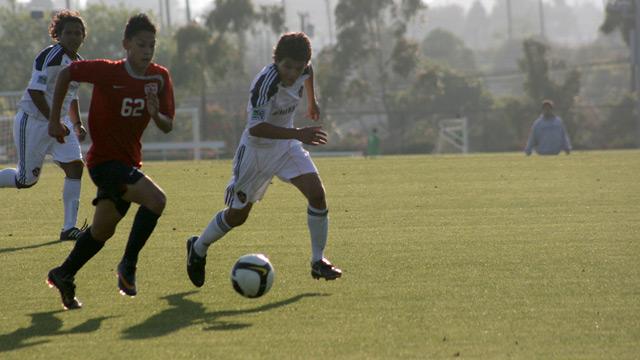 On an early evening that turned into a chilly night, the U.S. U14 Boys National Team built on their strong progress in camp this week with a pair of scrimmage victories against older opponents.

As they had in their first exhibition tests two days prior, the U14 group more than held their own, defeating U15 LA Galaxy 2-0 before holding off U15 Cosmos Academy West in a 1-0 win.

Against the Galaxy, the U.S. squad showed the ability to make adjustments on the fly. The Galaxy strongly dictated the early action using physicality and the long ball, but the U14s caught on and combated the Galaxy with more movement and an improved work rate. 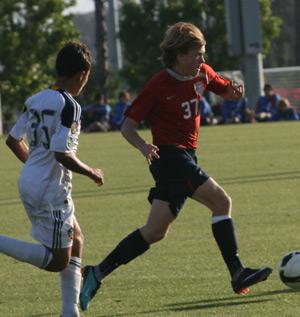 U14 BNT defeated LA Galaxy on Thursday.
Billy Abdallah, who started on the backline along with Tommy Redding and Guillermo Bermudez, epitomized the team’s effort with his competitiveness and long runs back. Abdallah has good upper body strength, but even he found it a tough task to muscle against the older Galaxy.

“It was a great challenge,” said Abdallah, who plays his club ball for the Fullerton Rangers. “In Southern California we play our own age group, so it’s always a challenge going against these older guys. About 15 minutes into the game we started to get the ball out and moving, and that’s how we got the goal.”

Chester Castellaw, who was a big stopping presence in the defensive midfield, played a nice chip up-field to striker David Villegas who volleyed in the first goal.

Castellaw was the recipient of the second score which came in the second half on a nice one-two touch with Collin Fernandez in front of the goal.
Fernandez had a good match and showed poise and solid ball skills while attacking on the left wing.

Little 4-foot-7 Alejandro Vergara is an entertaining player to watch and is affectionately called “Messi” by his teammates. His speed in the midfield allowed him to steer clear of the Galaxy’s physical play. The LA squad was most physical with Villegas, who withstood some shots and constant bodying.

The U.S. defenders stood out most during the match, and no one was stouter than Bermudez. He was one of the few U.S. players big and strong enough to move opposing attackers off the ball, and he did so while showcasing great on-ball defense.

Justin Vom Steeg spent the match in goal and made a few key plays to preserve the shutout.

In the second match, against Cosmos West, the U.S. side got an early goal and kept enough possession to keep their opponent scoreless the rest of the way.

A couple stellar talents stood out in this one, including Malcolm Dixon – who has elite physical ability. He made a stellar run in the first half and blazed behind the defense to poke in the game’s only score.

“In practice, we worked on 2v1 and that’s what (my goal) came down to,” Dixon explained. “I just moved off the ball and got it back. I had a couple more chances but I don’t know what happened.”

Dixon praised his team’s defense, saying their ability to defend as a unit is something that has come along since the squad journeyed to Mexico in January.

The Cosmos created quite a few chances but the U.S. team got great goaltending efforts. Cameron Keys started the match in net and was extremely aggressive in pursuing the ball, particularly on set pieces.

James Marcinkowski spelled him in the second half and showed off his athleticism and lateral movement on a few close calls down the stretch.

The U.S. U14s will conclude their camp on Saturday with matches against Pateadores and the Irvine Strikers.