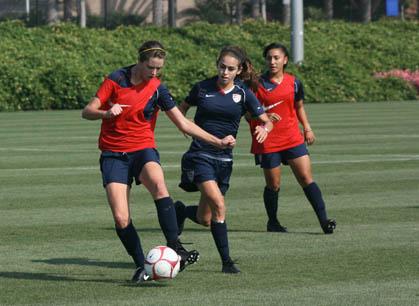 It will be an especially large group of starlets filing into the Home Depot Center in Carson, Calif., today as 36 players begin this week’s U.S. U14 Girls National Team camp. 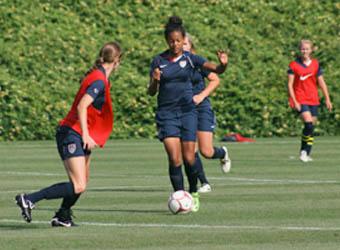 U14 Girls National Camp
It’s headed by coach Mike Dickey, who just completed a week’s worth of training with the U15s – their third meeting of the year. For the U14s, this will serve as the only training of the year, so it puts a premium on the work that will be done starting today until Aug. 30.

“That’s always the hardest part,” Dickey said. “You don’t have them on a consistent basis and you don’t know what training is like when they’re away so you try to make the most of this time.”

In order to do that, Dickey will break up the large contingent into two smaller groups to maximize training sessions and instruction. The entire group will enjoy a late training together today before going their separate ways until scrimmages. Four scrimmages are currently scheduled for the camp including three from outside clubs.

All of the players who will be present for the camp have recently competed at the 101-player U.S. U14 Girls National Team I.D. Camp in Pomona, Ca. All players were born in 1995 and have their eyes focused ahead on competing in the 2012 FIFA U17 Women’s World Cup.