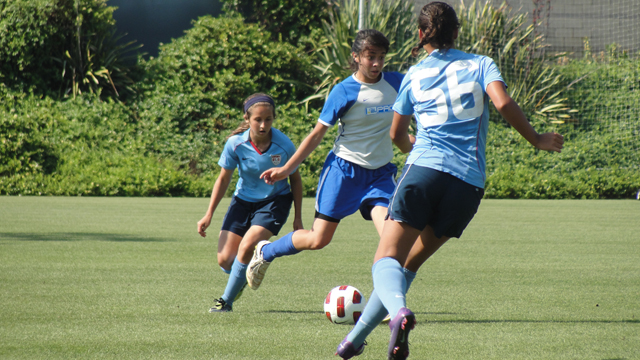 CARSON, California – The U.S. U14 Girls’ National Team wrapped up camp on Saturday with a pair of scrimmages against Cal South ODP’s 1997 age group.

The games were nearly mirrors of each other with the U14 GNT emerging victorious 4-0 in both contests behind the stellar play of strikers Sunny Dunphy and Madison Schultz, who combined to score five of the eight goals. 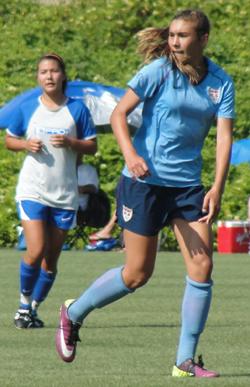 In the first game, Sunny Dunphy was the star with two goals. The tall striker was the catalyst of the attack with her linking play against older, physical defenders.

“We look at who’s work rate is there,” U14 GNT assistant coach Damon Nahas told TopDrawerSoccer.com after the game. “Sunny [Dunphy] put in the work and took advantage of her opportunities.”

The first chance for Dunphy came at the end of the first half when she was fed the ball at the top of the 18-yard-box and promptly sandwiched by two defenders.

The forward from Carlsbad, CA converted the penalty kick to give the youth national team the lead at the break.

The youngsters settled into the game more in the second half and had a better run of play for stretches with good spells of positive possession.

Only 13 minutes after the break, U.S. doubled the lead when hyperactive midfielder Lynsee Voss ripped a shot from 25 yards out. Voss’ effort deflected off the back of a defender and floated over the keeper and into the net.

The momentum was all in the U.S.’s favor at that point and the goals started to pile on.

Three minutes later, substitute Shea Moyer, who helped change the complexion of the game with her silky play in the center of the park, picked out Dunphy 20 yards from goal. The ODP defender allowed the forward too much space and Dunphy rifled a shot past the defender and keeper for her second of the game.

Moments later, the Southern California-native should have completed the hat trick. On a quick counter-attack, Dunphy sent substitute winger Shaelan Murison down the right wing on a great through ball. Murison slowed to let her fellow attackers catch up and then slotted it to Dunphy, who one-timed it toward the goal, but a retreating defender managed to save the shot off the line.

Dunphy was replaced a couple of minutes later by Briane Folds, who quickly joined in the fun with a handful of chances. The shifty striker was a stark contrast from Dunphy, who is more calculated and efficient with the ball.

Folds put her name on the scoresheet in the 69th minute when she took a chance from range and beat the keeper thanks to a favorable skip. The forward from Lakeland, Florida created a few other chances in her few minutes on the field.

“We talk about opportunity,” Nahas said. “It is what they do with their opportunity – whether it is 10, 20, or 30 minutes. In both games, there players who maybe did not show as well as we hoped during the week but caught out eye today, and that is what we were hoping for from this. Players who could be a bright piece of the future [for this age group].” 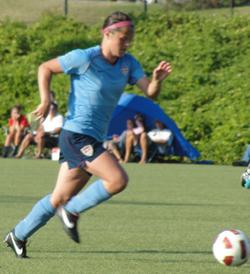 There was a point shortly after kick off on Saturday afternoon at the Home Depot Center when the opposing defenders realized it was going to be a long 80 minutes.

U14 GNT forward Madison Schultz started the game like a bat out of hell. The finisher from Washington had two goals before most parents had their camcorders on.

Schultz’s first goal came in the fifth minute when she hit an extra gear racing past defenders, froze the goalie on the line, and coolly slotted in the opening strike before racing back to the midfield line to start again.

Four minutes later, Jenna Bike supplied a perfect cross to the near post that Schultz headed home for her second. There was nothing truly artistic about the goal, but it showed just what type of player Schultz is – hungry.

She stepped in front of two defenders who were waiting for the ball and tapped it in with her head.

Her constant thirst for more goals gives a fairly clear picture of her style, but she is not entirely selfish with chances.

Schultz could have had a hat trick in the first half in the 38th minute, but she gave up the chances to Bike for easy open net tap in.

The movement started with left back Mary-Alice Vignola who fed Jordan Harr. The Texas midfielder slipped Schultz in between the defense, but the Northwest Nationals striker graciously laid it off for Bike for an easy open netter.

There were moments when the team tried to rush the ball quickly to the attack, and struggled to string passes together. Nahas tried to instruct the midfield to be more active in keeping hold of the ball, but the message did not bring immediate results.

“When you are coming off a week-long camp, these players know this is the last chance to impress [the coaching staff],” Nahas said about the play in the first half. “There is part of me that wants to jump out of my skin and there is another part of me that respects their effort. They are 13 and 14 years old, so I can appreciate and applaud that effort.

“Now, we are trying to find those players who are putting in the effort and maintain a sense of composure. Credit to the group we played against though, they pressed high and gave our little [midfielders] some trouble.”

Nahas’ midfielders of Jlon Flippens, Daria Petredes, and Harr figured it out and kept control of the game in the second half, which is when Schultz put the cherry on top of her sundae.

It started with substitute center back Samantha Bruder intercepting a pass around the center circle. Bruder slotted it to Harr who found Schultz once again.

With a head of steam and running down hill, there was no catching the forward. Schultz smashed her shot over the keeper’s shoulder and into the twine for the final tally of the game.

“Schultz had a hat trick and an assist,” Nahas reminisced after the game. “You can’t ask for much more from a striker.”

The U14 GNT will depart camp tomorrow and reassemble with a new group in August for the second of three identification camps for this age group.