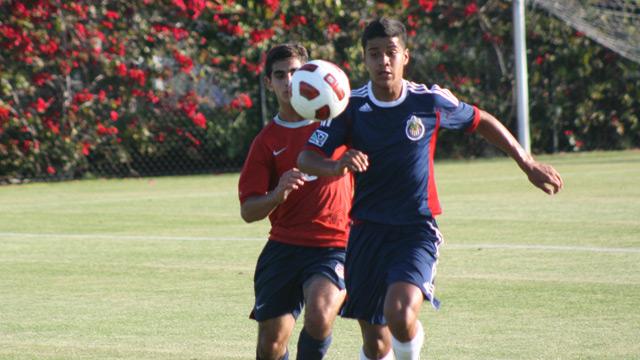 He got a little of both on Wednesday when his U.S. U14 Boys National Team campers played a pair of scrimmages at the Home Depot Center.
The U14s played with plenty of aggression despite a 0-0 tie with Chivas USA, while the other half of the squad made up for missed opportunities in a satisfying 3-0 victory over Arsenal FC.

Midfielder Benjamin Swanson scored in the Arsenal match then assisted us all in putting things into perspective: “The game is about scoring. If you don’t score, you don’t get the result,” he said.

With a potent lineup that was both cohesive and dangerous, it was clear from the outset that the U.S. team was going to score in its match against Arsenal. 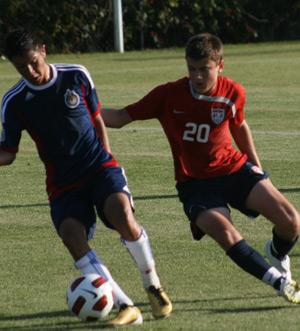 Dixon is a serious threat up front. He’s tall, lightening fast and has no problem putting away opportunities. After a couple close calls early, Dixon was led with a perfect ball from the midfield and simply outran everyone, beating the goalkeeper to the ball and putting it in for a 1-0 lead.

The U.S. side simply had too many playmakers and too good of chemistry for Arsenal, which played on its heels for much of the match.

Akale was one of the reasons why. Hailing from the Minneapolis, he’s as dynamic a player as there is in camp and he repeatedly showed his dribbling ability by carving up the defense. He’s a speedy left-footed player, who played out right and typically cut back inside.

Because he’s so fast and shifty there were times when he dribbled into no man’s land – just because you can get anywhere you want to on the field, doesn’t necessarily mean you should. But he’ll learn that, and he’s a serious talent.

In the second half, Akale scored on a great build from the back and setup by Lindley, who also played a good match, setting up Akale's goal as well.

The third goal would come from Swanson, who took a feed at the top of the box from Calderon.

What stuck out most about the effort was how much the unit looked like a team.

“We’ve been together for a while now, and each camp we grow more comfortable,” Swanson said. “We put away our chances, moved the ball and pressured. We’re just trying to improve and keep it rolling.”

In the match against Chivas USA, the chemistry for the U14 group was most apparent in the standout backline.

Pablo Pelaez, Guillermo Bermudez, Tommy Redding and Billy Abdallah started together and were on form in much the same way they were during last month’s camp appearance. Midfielders Collin Fernandez, Coy Craft, Chester Castellaw, David Villegas also started the match on the field along with strikers Josh Perez and Amirgy Pineda.

The pulse of the team, though, came from the back. It came in the form of Abdallah making things happen all over the field – from tough slide tackles in the final third, to strong throw-ins; Bermudez is a big presence and a tough defender to beat, and Redding is athletic and dangerous moving forward.

It’s no wonder the unit has such trust in one another.

“If I get beat, I know they’re going to be behind me,” Pelaez said. “It’s great to be on the field with them, because they all know how to play and touch. We all know what the other guy is going to do with the next play.”

It showed, with poise and patience that allowed the U.S. to build from the back and keep most of the possessions.

The team had some good looks at a goal: Pineda was active, and made some nice strikes while Redding is really good in the air and just narrowly misfired on a couple of set pieces.

The U.S. group will be back on the hunt for those goals tonight when they play a second night of scrimmages against LA Galaxy and Cosmos Academy West.