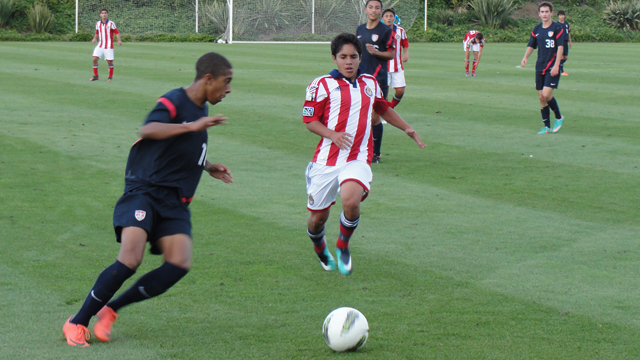 CARSON, Calif. – The U.S. U15 Boys National Team lost 6-0 to San Diego Surf U16 and 3-1 to Chivas USA U16 on Thursday at the Home Depot Center in the final scrimmages of the fall camp for this cycle.

The heavy defeats can be attributed to a number of factors including fatigue, multiple injuries, and facing older competition, but the bottom line was the performance was not up to the standard set by this group over the last nine months. 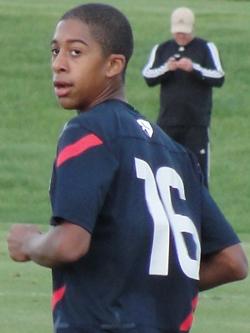 This roster has continuously enjoyed successful outings during these camps with a number of wins accumulated over that period. However, Thursday was a dose of reality about how far these players still need to go before reaching the next level.

With limited time and space in the games, the U.S. struggled to get any flow to its possession-oriented style. Both Surf and Chivas USA closed quickly and did not relent during the 80-minute friendlies, which occurred simultaneously prior to LA Galaxy’s home playoff game.

U.S. U15 BNT head coach Tony Lepore kept an eye on both games while assistant coaches Stephen Klein and Rodrigo Marion took charge of the group that played against San Diego Surf on the lower field. Mike Munoz and Rob Bercerra had control of the team playing against Chivas USA.

The goals came early and often for Surf with two goals in the opening 18 minutes and three tallies in an 11-minute span in the second half.

Anthony Wright scored twice for the San Diego Development Academy club while Misael Miranda, Gerardo Pedroza, Zachary Lagotta, and Ernest Reyes all added a goal each to the score.

“We kept the ball very well,” Surf U16 head coach Mike Nicholson told TopDrawerSoccer.com. “We tested them defensively, and really stretched them.”

The U.S. had a lot of difficulty adjusting to the speed and pressure of the team that was two years older at most positions.

“Tonight, both of the groups looked fatigued, so we wonder did we do too much too soon with this group,” Lepore said in reference to the altered schedule of the week. “It was a good test though, and that is why we come out here because we know we will get good games. When they are in these kinds of games, we know they can learn a lot and we can learn a lot about them.”

The highlights for the youth national team perspective were limited. New York Red Bulls forward Sean Teixeira was at the end of the best buildup of the night from the U15 BNT when he headed in a cross after a lengthy passing sequence. Teixeira’s goal was wiped off the board when the assistant referee raised his flag.

LA Galaxy goalkeeper Abraham Romero made a diving save on a free kick from 22 yards out by a Surf player. Romero had a good read on the ball that looked bound for the upper corner.

Orrin Gaines II scored the lone goal of the night, and his second in as many games, for the youth national team but it was not enough to overcome Chivas USA, which was led by an inspired effort from Alejandro Vergara.

The former U15 BNT midfielder [Vergara is part of the ’97 age group] had a goal and an assist to lead Chivas USA U16, under the direction of Greg Vanney, to the victory.

His assist came on the opening goal in the 17th minute. Vergara delivered a perfectly placed corner kick to the far post that striker Caleb Calvert directed into the net.

The youth national team responded eight minutes later when Gaines took matters into his own hands. The Lonestar SC forward beat two players, and then slotted the ball into the corner of the net.

Chivas USA regained the lead five minutes later when Daniel Crisostomo slipped behind the U.S. defense and scored the game-winning goal. Vergara added the insurance tally in the second half to cap off the scoring.