One of the keys to youth development is finding the right level of competition to challenge and educate elite players.

For the U.S. U15 Boy’s National Team, that search recently took them to Holland for a ten-day trip that culminated with a fifth-place finish at the Marveld Tournament in Groenlo.

According to head coach Tony Lepore, it was mission accomplished in Europe.

“Overall [it was a] really positive, great experience for the players,” he told TopDrawerSoccer.com. “The competition was very good, and I thought our boys dealt with it very well.” 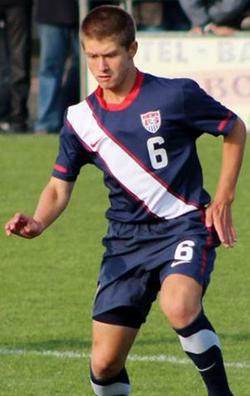 Added midfielder Cameron Lindley: “I thought overall it was a great experience. Everyone had a good time seeing all these players and comparing yourself to all these European players who are supposed to be so much better than us but they really aren’t.”

Along with the tournament that lasted over the weekend of June 1, the experience included two friendlies against youth sides from Dutch clubs Feyenoord and Vitesse.

After winning both those matches – 5-0 against Feyenoord and 4-2 versus Vitesse – the U.S. U15s kicked off the tournament on June 1, the first of seven shortened games in three days.

The hectic schedule of the actual tournament presented another obstacle the players and coaching staff had to address.

“I felt like it was a little overplay,” Lepore said. “And it was difficult for our players to adjust, but I think that they adapted pretty well. The first night for example, we played Real Madrid and got off to a great start. We were very pleased with our performance and the boys were happy to get a result. And an hour later we’re playing Bayer Leverkusen.”

Lindley concurred with his coach about the nature of the scheduling.

“It was very, very difficult,” he said. “After playing a game you’re kind of done and shut off, but you can’t do that. If you shut off, forty minutes later you’ve got to step right in and play another game.”

Keeping one eye on the scheduling of the actual tournament, Lepore shuffled his lineup from the first friendly to the second one, but injuries provided additional difficulties, as two players were lost before Marveld began.

Still, Lepore wanted players to earn their spots in the starting lineup despite the adverse scheduling conditions.

“In the tournament we did want some competition from within, we wanted to provide everybody with an opportunity at the same time, so we went with guys each game that we thought were mentally and physically the most ready,” he said. “We definitely had to share the physical load.”

During the games themselves, the focus shifted into implementing a number of the points of emphasis the U.S. is trying to utilize at the youth level, starting on the style of play, possessing the ball, and attacking from out of the back.

Lepore was pleased with how his team executed in that regard.

“We felt good about being able to impose our style of play and I think in many cases the response from opposing coaches and the tournament organizers, people were actually surprised,” he said. “So I think the group, the players earned well-deserved respect about their own talents within our style of play. We had a lot of guys that could showcase their individual talents, but also as a team.”

Across the first two days of the tournament, the USA posted a record of 2-2-1, and with a 3-0 defeat of Liverpool on June 3 set itself up for a spot in the fifth-place game against Ajax, securing that position with a 4-2 win on penalty kicks to wrap up the trip.

The U.S. also traveled there with three players - Mukwelle Akale, Cameron Lindley and Tommy Redding – who are currently part of the U.S. U17 Residency program and buoyed the U15s in Holland.

“Their experiences at residency as well as the physical conditioning really helped them,” Lepore said.

There’s little time for the U15s to rest, however, as the group turns its sights towards a tournament down in Mexico City. The team heads south of the border on June 15, and most of the same players will be going, minus Lindley and Redding, who will join up with the U17s for a trip to Costa Rica. Rigoberto Rojas is also set to miss out as he is recovering from a knee injury.

Three players, Collin Fernandez (Chicago Fire), Martin Salas (FC Dallas) and Sebastian Elney (Boca United), are set to replace that trio for the competition in Mexico City, as the U15s continue to navigate their way through a busy summer.