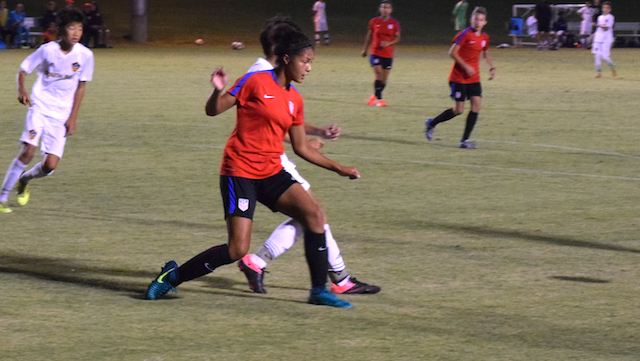 CARSON, California - The U.S. U15 Girls National Team continued its identification process with a camp in Southern California in mid September. As part of the camp, the U.S. Youth National Team played a three 30-minute period game against LA Galaxy South Bay Boys on Wednesday. While the game was a dominant affair for the Youth National Team, it’s difficult to get a read on the quality of the group given the level of competition from the game on Wednesday.

The one-sided affair suggested this is going to be a group that likes to press quickly and does an excellent job at suffocating ball-movement with a midfield trio that blocks passing lanes. The defense is built with a foundation that tries to always push one of the back four into the attack while the midfield is fluid in the movement between the lines with quick passing. The forwards were physical and imposing on a, perhaps, younger boys squad.

TopDrawerSoccer was on hand for the scrimmage. Below are the players who stood out from the game from the U.S. U15 GNT.