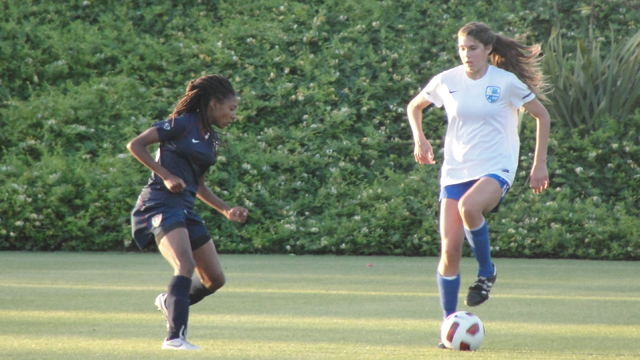 CARSON, California – In a very competitive and entertaining affair, the U.S. U15 Girls’ National Team battled Cal South Girls ODP ’96 to a 1-1 draw in a scrimmage at the Home Depot Center on Wednesday.

Cal South ODP struck first in the opening minutes off of a corner kick, as the youth national team started the game absentmindedly.

“The start of every game is critical,” U15 GNT head coach Daman Nahas told TopDrawerSoccer.com. “Mentally, we did not start the game well. We gave up a corner kick in the first couple of minutes and now we are chasing the game. 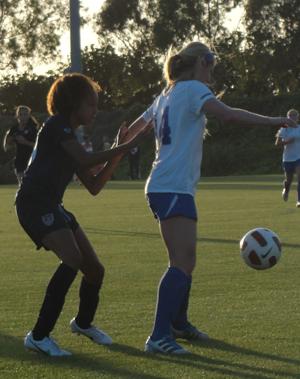 U15 GNT's Ellie Jean on defense

“Anytime a goal like that happens to a young group, you have to see how they react. It took them a while [to get back into it]."

Compounding the lackluster start was the quality of the competition. Cal South ODP, which claims a few players from last year’s U15 GNT squad, won the 2012 US Youth Soccer ODP Championship in March.

“We played against a good soccer team,” Nahas said about the opponents. “I give them a ton of credit. They possessed the ball and they were dangerous.”

Cal South’s coaching staff was equally complimentary of the talent on the other side as well, and pleased with how the game played out.

“In the end, a draw was a good result for both teams,” Cal South ODP head coach John Napier told TopDrawerSoccer.com. “They are a very fit team – they were pressing all over the park – and I think we matched them. I think we did pretty well.”

After the rocky start, the U15 GNT had a couple of early chances in the first period via Marley Canales, neither of which was on frame, but overall the team struggled to gain control of the game.

“It was difficult at times,” Nahas said. “We were a little bit hectic. You could see some heavy legs from us due to the trainings, but no excuses. We weren’t able to maintain to the possession we would have liked.”

The U15 GNT did seem more comfortable as the minutes ticked away from one period into the next, but the team lacked a spark that could beat a very organized defense led by Annia Mejia.

The California recruit was seemingly everywhere across the defense picking off countless passes and leading the possession effort for the ODP side with quality distribution.

Nahas’ group had one good chance to sneak past her early in the second period when Zoe Redei’s quick footwork helped her evade two defenders at the top of the box.

The forward from Eclipse Select raced into the area, but Cal South ODP’s goalkeeper was quick off her line and nipped the ball off the striker’s foot cleanly.

For much of the second period, the battle was held in the midfield as both sides clawed and fought for possession at every turn.

The game turned on its head in the 57th minute when Nahas introduced Jennifer Westendorf to the proceedings.

Within two minutes of stepping on the field, it looked like Westendorf had found the equalizer.

The striker from Gwinnett Soccer Association benefitted from a good run by clubmate Ella Stevens, who drew multiple defenders to her slaloming effort down the center of the field before passing off to Westendorf.

The striker was a touch too eager and had her effort wiped off the board by an offside call.

It was only a momentary setback though, as Westendorf grabbed the game-tying strike midway through the third period.

The GSA Phoenix striker snuck around the defense on her tippy toes as midfielder Dorian Bailey eluded challengers.

Bailey spotted Westendorf’s run and perfectly fed her with a pass into the box behind her mark. The Alabamian, who has 29 goals in the ECNL this season, delicately lifted the ball over the sliding challenge from the keeper for the U15 GNT’s lone goal.

“Players coming off the side definitely made an impact,” Nahas said. “We are stressing the opportunity for the kids – whether they started the game or came on as a sub, we asked them to settle the game down and let it come to us.”

Westendorf, Bailey, and Gabriella Carreiro definitely had that presence on the field against older competition, which helped the U15 GNT enjoy some good stretches of play in the final period of the draw.

The U15 GNT will return to the field on Saturday for another scrimmage before the camp concludes on Sunday.

Update 2:00 P.M.: Tegan McGrady was incorrectly omitted from the substitute list on early edition of this article.