U.S. U17 roster announced for Concacaf 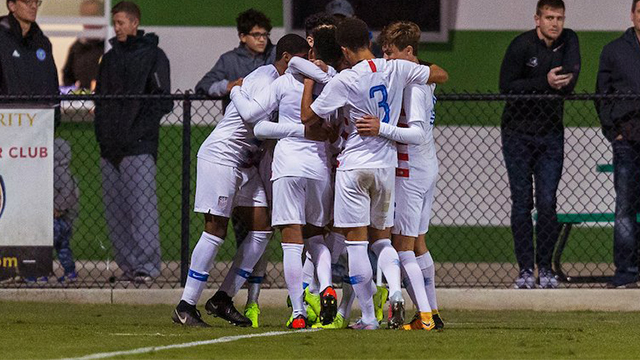 U.S. Under-17 Men’s National Team head coach Raphael Wicky has called a 20-player roster to represent the USA at the 2019 Concacaf U-17 Championship, set for May 1-16 at IMG Academy in Bradenton, Fla.

This year’s tournament brings a new format, as 20 nations participate in the competition. The four semi-finalists will qualify for this fall’s 2019 FIFA Under-17 World Cup in Brazil as representatives of Concacaf.

The USA was drawn into Group F and kicks off its tournament against Canada on Thursday, May 2 at 6 p.m. ET. The U.S. then faces Barbados on Saturday, May 4 at 4 p.m. ET and finishes group play against Guatemala on Monday, May 6 at 6 p.m. ET.

All three of the USA’s group stage games will be broadcast on Univision Deportes Network and the Concacaf GO app, available on iTunes, Google Play and online.

“I’m very excited about the team we’ve put together for this World Cup qualifying tournament,” Wicky said. “There’s a lot of very good quality in this group. We brought together a strong roster for the mini-camp earlier this month, and now we’ve added a few more pieces with a lot of good characteristics. The players have brought a great mentality and we’re excited and ready for a number of interesting games ahead.”

2019 Concacaf U-17 Championship Roster by Position (Club; Hometown; U-17 Caps/Goals)

The new Concacaf U-17 Championship format featured four qualifying groups and four main groups drawn directly into the tournament proper. The qualifying groups played in round-robin competition from March 16-25 and April 1-7 with the four group winners (Nicaragua, Dominican Republic, Guadeloupe and Puerto Rico) advancing directly to the Round of 16. The top three finishers from each of the main groups will also advance to the Round of 16. From there, it’s a single-elimination bracket that will qualify four semifinalists to the U-17 World Cup as well as crown a confederation champion.

At the 2017 Concacaf Championship, the USA lost the title game to Mexico in heartbreaking fashion, falling in penalty kicks after a 1-1 draw. The team went on to reach the quarterfinals of the 2017 FIFA U-17 World Cup in India, where it lost to eventual champion England.

U-17s this cycle with five goals.