US U17 WNT beat Jamaica at Concacaf Cup 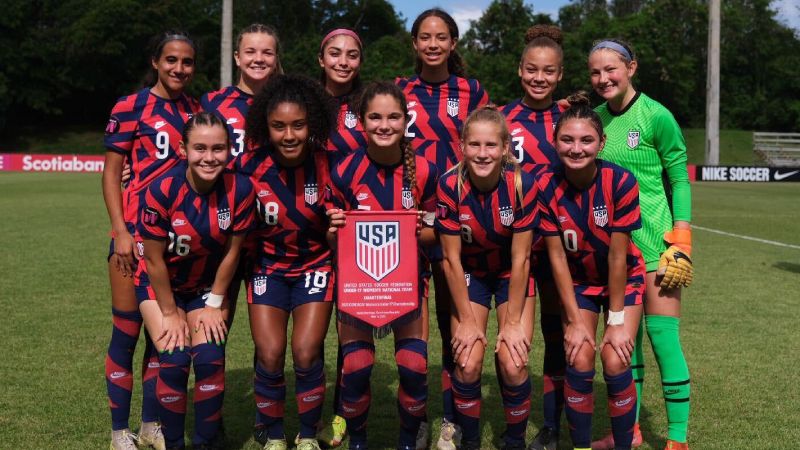 Natalia Astrain called her team into a huddle. It appeared a businesslike discussion, the kind you wouldn’t normally see after your team advances to the last four of a major tournament for the first time in their international careers.

The newly-minted U17 USWNT coach chatted with her team for a few minutes, cutting short the otherwise jubilant celebrations that came with a 4-0 win over Jamaica in the Concacaf cup quarter final.

This was a game where the margin of victory should've probably been greater. Had shots not gone askew, and the odd pass not been overhit, the US would perhaps have run out bigger winners. Still, Astrain’s squad turned in a solid performance, one of countless passes and innumerable chances.

Leaning on the trickery of Onyeka Gamero on the wing, and dictated by the composure of Riley Jackson in the midfield, the US created chances aplenty. And had it not been for double-digit saves from Jamaica’s Liya Brooks in goal, the scoreline could have been stretched. Either way, the win was the fifth on the bounce for the U17s in their Concacaf Cup campaign, and sets up an enticing semi final matchup against Canada on Friday.

The US opener came early. After an extended period of pressure, Alyssa Gonzalez found a pocket of space 30 yards from goal. She neglected the option to shoot, instead floating an angled pass into the box — which Amalia Villareal gratefully nodded into the bottom corner.

But they continued to push. With the Jamaican side defending deep — often with nine outfield players defending their own box — the US were invited to push forward. And they obliged. Gamero fired a shot over the bar. Villareal saw a curler go wide, before skewing a volley outside the post five minutes the later

🎥 ⏯️ @uswnt and @jff_football played for a ticket to the #CU17W semifinals.
Checkout the best moments of the game!

So, the US second was of little surprise when it came. Gamero played provider this time, teasing her marker down the right wing, before skipping away and cutting it back to the top of the box. Invited into the space unmarked, Charlotte Kohler strode onto the ball and fed it into the top right corner for a 2-0 lead.

The third came five minutes before half time, and it was slick. Jackson found Villareal in the box, who swiftly flicked the ball back into her path — setting up an easy shot for 3-0.

And it should’ve perhaps been more. A few big stops from Brooks prevented further damage, while crucial clearances from Tyesha Nelson negated the US’ wide threat, stalling the Stars and Stripes enough to keep the scoreline honest.

Further chances came after the break. Brooks was stretched, the bar was rattled, while Gamero continued to dash down the right wing. And it was from her dazzling running that the US got their fourth. In the 56th minute, the winger pushed the ball to the byline, clipped the ball into the box, and careened away in celebration after Melina Rebmimas found the bottom corner.

Still, the US continued to apply pressure, that zippy play maintaining its pace. Passes were spread to the wings, opponents were taken on, shots were sprayed on goal. But the Jamaican defending was resolute. Brooks continued to parry efforts at her net, tallying five saves over the last 30 minutes — including one dramatic tip over the bar to deny Gamero.

As the half dragged on, Astrain started to rotate, introducing new talent, trying to find new angles. But the US goal tally remained at four.

And after the whistle blew, Astrain brought her team together, celebrating a composed 4-0 victory, one that further established the US’ credentials as favorites. For all of the jubilance, though, the US still has work to do. Indeed, at some point those countless chances can't be squandered.