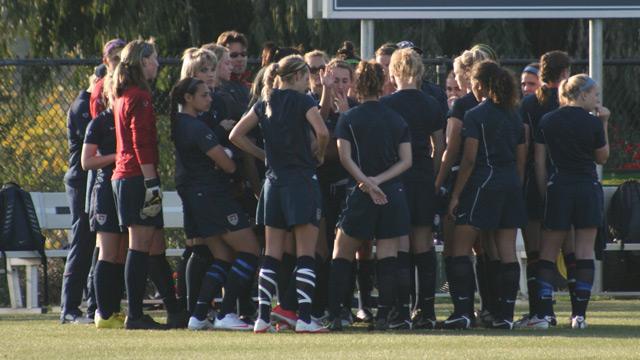 The U.S.  U17 Women’s National Team started its new cycle en route to the 2012 FIFA U17 Women’s World Cup, with a training camp in Sunrise, Florida beginning Jan. 31st.

The camp included a pair of matches against the German U17 National Team, where the U.S. tallied a 3-1 win and a 2-2 draw. The new cycle points toward the summer of 2013 when the FIFA event is held in Azerbaijan.

Amber Munerlyn scored a pair of goals in the victory against the Germans, with Summer Green adding a third. In the 2-2 draw it was Andi Sullivan and Lauren Kaskie who got their names in the tally sheet for the U.S.

Andi Sullivan
“It’s a huge honor to be in this cycle knowing that in a little over a year I can be traveling abroad representing my country doing something I have a huge passion for,” Micaela Powers said.

Powers went the full 90 minutes in the second match against Germany.

Andi Sullivan played alongside Powers as an early substitute in the 37th minute and found the back of the net five minutes earlier burying Elizabeth Boon’s cross.

Sullivan is no stranger to the national team, already participating in her fourth training camp, but still considers this a huge honor.

“There's nothing I look forward to more than going to camps to help our country prepare for Azerbaijan next summer,” she said. “Even though it's just the beginning of the cycle, we work very hard to be the best we can be now, so that we can improve as the World Cup gets closer.”

Protecting the pipes for both games was Jane Campbell. This is her second stint with the U17s, joining them last summer shortly after World Cup Qualifiers, which she used to bring a sense of leadership.

“I feel like I can go the extra mile, whenever my teammates need extra help in practice I can support the team no matter what,” she said. “I can bring skills that I think will help the team succeed, and I’m a diligent player when it comes to playing on the field.”

There’s still a very long road ahead to the FIFA U17 Women’s World Cup (including CONCACAF Qualifying, which the last U17 WNT cycle failed to navigate), and these girls understand and are aware of the necessary steps to place themselves in the best position to once again be called by the national team.

“I just need to keep working hard back at home by training everyday, eating properly, keeping up with my academics, and just staying focused on what my goals are for soccer,” Campbell said.

For Sullivan, it’s capitalizing on the inspiration she gets every time she spends time in training camp. She is aware that she has weakness, and takes it upon herself to improve her technical work and fitness.

On the other hand, Powers attention will be her mental focus.

“I have to improve my technical abilities, but I know it’s there,” she said. “Mentally however, I need to grow my confidence level and show that I can play consistently and stay focused during the whole game.”

Below are the U.S. U17 WNT line-ups against Germany (Courtesy of U.S. Soccer):