U.S. U17 WNT cruises past Bermuda 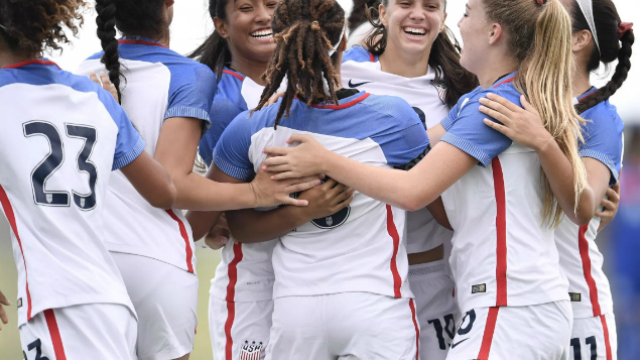 The U.S. Under-17 Women's National Team defeated Bermuda, 10-1, in its second Group B match to book a spot in the semifinals of the 2018 Concacaf Women's U-17 Championship. Eight different players scored the USA's ten goals with midfielder Maya Doms and forward Sunshine Fontes both contributing a pair of goals. Forward Reilyn Turner scored and picked up two assists on her debut for the U.S. U-17s.

The match marked a re-start to the World Cup qualifying tournament that was postponed at the end of April due to civil unrest in Nicaragua. The USA had to wait an unprecedented 46 days between group games and came out of the gates with speed and energy, almost scoring twice within the first minute.

With the win, the young Americans maintain their spot atop Group B. Although the USA is tied with Canada, which narrowly beat Costa Rica 2-1 earlier in the day, on six points apiece, the USA boasts a vastly superior goal differential. The U.S. and Canada are set to meet on Friday, June 8 to determine which nation will finish first in the group, while Bermuda and Costa Rica, who meet the same day, have been eliminated from possible advancement. The Americans need a win or a tie against their northern neighbors to claim the top spot in Group B.

The USA dominated the entire 90 minutes but were particularly impressive at the beginning of each half, tallying through Mia Fishel in just the sixth minute to open the scoring then getting a pair of goals, from Makenna Morris and Doms, in the opening three minutes of the second frame. Between those goals, Diana Ordoñez struck in the 25th minute for her first goal with the U.S. U-17 WNT, Doms grabbed the first of her brace in the 32nd and Turner and Samantha Kroeger added strikes in the 41st and 44th minutes, respectively. Bermuda momentarily tied the match in the 17th minute when Leilanni Nesbeth's long-distance freekick snuck past USA goalkeeper Julia Dohle at the right post.

Already up 7-1 with five minutes gone in the second half, the USA was content to be more patient with the ball, passing around the field while working to create well-crafted goal-scoring opportunities. The play of Bermuda goalkeeper Zakhari Turner certainly kept the score down, as she made a number of fine saves to keep the U.S. from adding to its goal haul until late in the match. In the 84th minute Astrid Wheeler swept home her second career U-17 international goal before substitute forward Sunshine Fontes grabbed a late brace with strikes in the 86th and 91st minutes to cap off the emphatic win for the USA.

Goal Scoring Rundown:
USA - Mia Fishel (Michela Agresti), 6th minute: Mia Fishel ran down a long ball from Michela Agresti over the top of the Bermuda defense and rushed in alone on goal before rolling her shot into the lower right corner. USA 1, BER 0

BER - Leilanni Nesbeth, 17th minute: Bermuda equalized with a long range freekick from 20 yards out that was taken by Leilanni Nesbeth. The shot skipped off the ground as it neared goal and skipped through the grasp of U.S. 'keeper Julia Dohle, nestling just inside the right post. USA 1, BER 1

USA - Diana Ordoñez (Reilyn Turner), 25th minute: Ordoñez ran down an intercepted short goal kick that was headed toward the Bermuda box by Reilyn Turner. As she bore down on goal, Ordoñez held off a defender and slipped a shot beneath the onrushing goalkeeper to again give the USA the lead. USA 2, BER 1

USA - Maya Doms (Natalia Staude), 32nd minute: Center back Natalia Staude sent a nice sharp pass along the ground from near midfield that bisected the Bermuda defense and picked out Doms all alone in front of goal. With plenty of time, Doms picked out the lower left corner. USA 3, BER 1

USA - Reilyn Turner (Natalia Staude), 41st minute: Staude played another ball over the top for Turner to chase. Upon collecting the ball deep in the box, Turner cut toward goal and knifed a shot through the narrow gap between the Bermuda goalkeeper and the right post for her first goal in her first cap for the U.S. U-17 WNT. USA 4, BER 1

USA - Samantha Kroeger (Maya Doms), 44th minute: A well-worked U.S. attack up the right side resulted in a lofted ball into the box that Doms took down with a nice touch. However, her next touch got away from her and Kroger swooped in to pass the ball into the net from point blank range. USA 5, BER 1 [WATCH]

USA - Makenna Morris (Natalia Staude), 47th minute: Beginning in her own half, Morris carried the ball upfield and then between a pair of Bermuda defenders. As she neared the top left corner of the Bermuda box, she uncorked a world class blast into the upper left corner for her second career goal with the U.S. U-17s. USA 6, BER 1 [ WATCH ]

USA - Maya Doms (Smith Hunter), 48th minute: Another U.S. attack set Hunter free down the right side and she bent in a perfect cross from near the left corner flag to the back post that perfectly picked out Doms for an uncontested header. USA 7, BER 1

USA - Astrid Wheeler (Michela Agresti), 84th minute: After a short corner on the right, Sunshine Fontes' cross was nodded down by Agresti for Astrid Wheeler. With Bermuda goalkeeper Zakhari Turner charging out, Wheeler employed a high, sweeping kick to volley the ball into the unguarded goal. USA 8, BER 1

USA - Sunshine Fontes (Smith Hunter), 86th minute: After a throw-in deep in Bermuda territory, Hunter whipped in a low cross that Fontes controlled expertly with an initial touch that popped the ball up in the air. With her second, she flicked it over a closing defender before finishing it with a powerful volley into the roof of the net. USA 9, BER 1

USA - Sunshine Fontes (Reilyn Turner), 90+1: With the Bermuda defense pushing up high, Turner got in behind and sent a low cross though the goal mouth to the left post that a crashing Fontes easily tapped in for her second of the game. USA 10, BER 1 FINAL