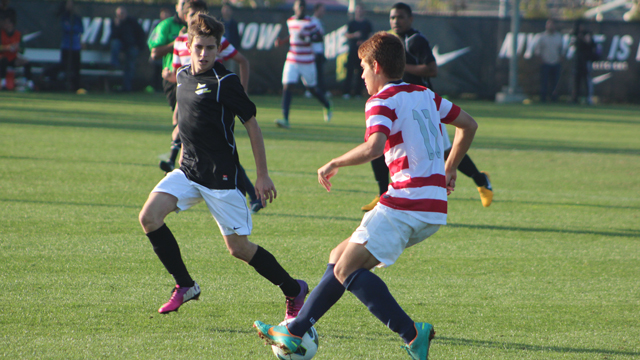 CARSON, Calif. – For many, the U.S. U17 Men’s National Team is a measuring stick to judge the direction and success of the youth program. If Monday’s 4-3 loss to Nike the Chance’s Final 16 was any indication, there will be many harshly judging this squad (and the overall picture) in the coming months when it gains full scale attention at the 2013 U17 CONCACAF Championship. 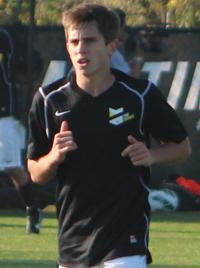 On Monday at the Home Depot Center, the U.S. U17 MNT failed to break down a ‘team’ that has only been together for a week in the high-scoring affair. The youth national team struggled to diversify any jaunt forward with possession and seemed unable to change the pace of the game at any point. With less patience than a five-year-old on an ice cream high, the U17 MNT continuously tried to force the ball through similar channels, which was easily cut out by the older competition.

Although the three goals would suggest a rousing creative display, the back of the net was only moved due to some careless giveaways by Nike the Chance’s defenders and goalkeeper and a mesmerizing own goal.

On the other end of the spectrum, the adult opposition, up to six years older at some positions, punished mistakes and exposed the lack of cohesion from the youth side. The piercing attacks on the wings setup three of the four goals while the other came off a miscue on a goal kick.

Nike the Chance, which is a global competition in hope of discovering talent and then providing opportunities at the professional level for the players, struck early when the lone representative from the U.S., Brian Iloski, broke through against the left side of the U.S. defense. Iloski dribbled down the touchline with limited pressure and picked out Bubakary Sonko in front of the goal for an easy tap in.

Iloski helped double the lead in the 35th minute when he stole the ball from Erik Palmer-Brown following a goal kick. The San Diego Surf product picked out Sonko again, and the Swedish striker calmly slotted it home with only goalkeeper Jefferson Caldwell to beat.

“I was aware of where the ball was, and I just tried to get it to Bubakary [Sonko] to try to score,” Iloski, a member of the U.S. U18 Men’s National Team, told TopDrawerSoccer.com after the game. “It was kind of weird [playing against the national team] because during the break I started walking to that bench . . . and then I realized ‘whoa, wrong team.’”

The U.S. U17 squad had a chance to cut the lead in half before the break when Rubio Rubin was taken down in the box. Captain Shaquell Moore was denied on the penalty kick attempt though by the Chance keeper. Moore’s attempt was about four feet off the ground and placed into the right side of the net, which made for an easy save for the keeper who read the shooter well.

The youth national team was lucky to crack the scoreboard 15 minutes into the second half to cut the deficit to one. The Chance center back Dario van den Buijs mishit a square pass to his goalkeeper that somehow resulted in an own goal despite no pressure on either player.

The older squad quickly returned the two-goal advantage when the U.S. could not handle a free kick from Jose Figura, which center back Marco Di Lauro headed home after a mix-up in the box.

Alan Winn’s inception in the 70th minute led to the U.S. cutting the lead to a one-goal deficit once again. Winn picked off a diagonal pass from the Chance’s back line and quickly played Rubin in on goal. The forward slotted it around the keeper for his first goal of the game.

Twelve minutes later, a similar situation played out with Junior Flores feeding Rubin for his second goal of the game.

The U.S. could not hold onto the draw though. Spaniard Saifeddine Alami Bazza raced past the right side of the U.S. defense in the final minute of the game and buried a shot into the far post for the final goal of the afternoon.

U.S. U17 MNT head coach Richie Williams was not available for comment after the game due to his travel schedule and time constraints, according to a U.S. Soccer official.

By youth national team game standards, this was a well-attended event, and much of that was thanks to the Iloski family who rented a bus to bring friends and family up from San Diego to the game. “It was exciting. I was glad that they came out,” Brian Iloski said about the support.

After starting on the bench, Borussia Dortmund-bound midfielder Junior Flores played the final 30 minutes of the game. Flores was cast in the No. 8 role, which did not seem to fit his style or what he wanted to accomplish.

The U17 MNT is headed to Panama in the coming weeks for a few friendlies. Panama is the host of the 2013 U17 CONCACAF Championship, which will be held in April.