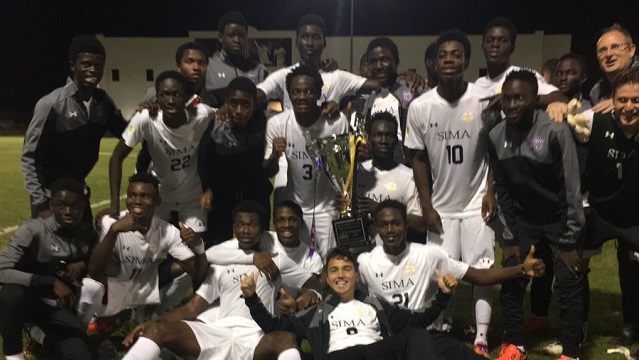 MONTVERDE, Fla. – In a fast-paced, high pressure and physical match, it came down to one call that left SIMA and the U.S. Under-17 team in a 1-1 draw to end the Montverde Academy Soccer Tournament International Bracket.

SIMA finished 2-0-1 in the four-team event to claim the inaugural championship. The US U17 National team went 1-0-2 and finished second. Flamengo (Brazil) defeated Feyenoord (Holland) 2-0 to finish 1-1-1 and in third place. Feyenoord went 0-3.

In the 80th minute, Tonny Temple entered as sub for the U17s and the move nearly paid off a minute later in the form of a game-winning goal. Instead, the play was ruled offside, leaving the teams tied and SIMA was able to kill the clock to secure the needed one point for the title.

The sequence started with Ayo Akinola ripping a shot that was parried away by SIMA keeper Chase Vosvick, right to the feet of Temple, who was following up on the far post and he easily finished the play. However, the offside flag went up immediately. Post-match review of the video showed Temple was onside when the ball was struck. Regardless, the call stood and the US team settled for the runner-up honors.

Both teams exhibited exceptional speed and skill, and the coaches – John Hackworth for the US and Mike Potempa from SIMA – agreed that these evenly matched teams are good for each other.

"They are the best team we played locally, and I'm sure they feel the same way about us," Potempa said. The teams are now 1-1-1 in three meetings.

SIMA struck first, in the eighth minute, as Caua Soares finished a perfectly laid off ball from Etim Monday. Only six minutes later, George Acosta answered for the US.