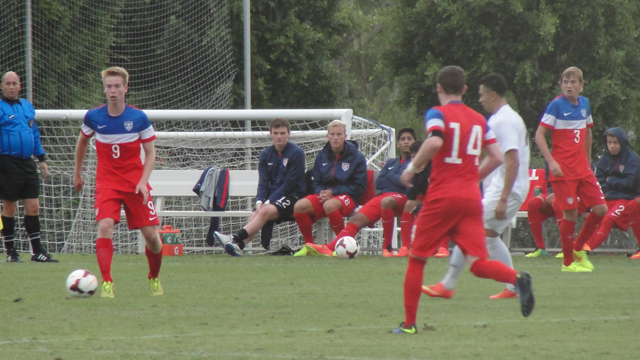 CARSON, California – The U.S. U18 Men’s National Team concluded camp on Thursday with a pair of scrimmages. In the afternoon game, U.S. U18 MNT played to a 2-2 draw against OC Blues FC, a USL-Pro team. The U18 MNT dropped the first game of the day 3-1 to LA Galaxy II.

In terms of intensity and pressure, it was a stark contrast between the morning game and the evening game from the youth national team. The U.S. U18 MNT set a high-pressure line and found some success in the channels.

It was PDA midfielder James Murphy with the first chance of the game. Murphy ripped a shot from 30 yards out that took a slight deflection and then hit off the post for a corner kick. Alessandro Campoy had his first look of the game following the corner kick, but the Blues goalkeeper punched the effort away.

Minutes later, Campoy was again in the middle of  the action. Robert Knights played in right back Donald Mason on an overlap to the touchline. Mason picked out Campoy on the far post, but the Weston FC forward’s shot was blocked.

OC Blues took the lead in the 13th minute when the professional team capitalized on a mistake and punished the teenagers for the opener.

The U.S. responded well with a beautiful connection between Knights and Campoy. Knights, the LA Galaxy prospect, served in a great ball to the far post that Campoy struck out of the air and into the lower corner of the net. It was the best goal of the day.

The equalizer was short lived. OC Blues regained the lead in the 22nd minute when Enrique Cardenas pressured Konrad Dziedzic into a sloppy clearance. The goalkeeper’s effort hit off the back of a defender and landed in front of Cardenas who chipped the keeper to give OC a 2-1 lead.

OC Blues held that lead into half time and had a couple of good looks to add to the total early in the second half. The best chance for Blues came on a crner kick, which was headed off the crossbar.

The U.S. weathered the storm and kept the lead only at one-goal. The introduction of Lucas Mendes and Jesus Perez Jr. to the midfield allowed the U.S. to return to a high-pressure line. The added defensive effort resulted in Mendes’ first shot of the game in the 73rd minute. The Blue gave away possession of the ball after trying to build from the back.

Mendes’ shot was turned away thanks to a very good diving save from the Blues goalkeeper.

Minutes later, Mendes put home the game-tying goal. Timothy Barger went on a journey down the left side and delivered a square pass to Mendes near the penalty spot for an easy finish into the net.

Blues had one good look with 14 minutes left, but the shot hit off the post. The two settled for a draw after 90 minutes.