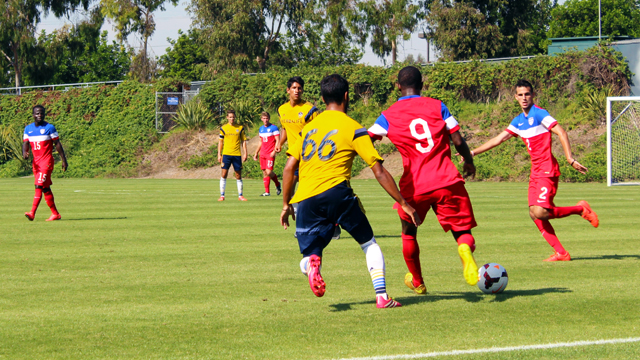 CARSON, California – The U.S. U18 Men’s National Team had two scrimmages on Thursday as part of the weeklong camp at the National Training Center. Head coach Javier Perez brought in 36 players into the camp with the aim of identifying new players and introducing them to the national team system.

Thursday’s scrimmages were the final events of the week for the players with a morning game against LA Galaxy II and an afternoon game against OC Blues FC. Check back on the site on Monday for a game report from the afternoon game.

The USL-Pro side full of adults jumped on the teenage youth national team early and struck first with a goal from Chandler Hoffman in the 15th minute. Alejandro Covarrubias doubled the lead 12 minutes later with a tap-in goal.

Hoffman nearly put the game to be bed minutes later when he had the ball on his feet 18 yards from goal after goalkeeper Bennett Sneddon failed to clear it. Hoffman’s shot went wide of the net.

The U18 MNT picked up it’s first shot on goal of the game in the 37th minute when Ryan Sierakowski tried his luck from the corner of the 18-yard box that the LA Galaxy II goalkeeper saved.

The youth national team put together a more impressive effort in the second half and broke through midway through the half off a penalty kick goal from Amir Bashti. D.C. United’s Eryk Williamson was tackled in the box to setup the shot from the spot from Bashti.

The game opened up following the goal and Hoffman had another look at grabbing his second goal of the game. The LA Galaxy II forward skated past a pair of defenders and then ripped a shot on goal, but Mason Stajduhar pawed the shot away for his first save of the game.

U.S. responded with a great movement from Williamson down the right side that eventually fell to Stephen Payne (Chicago Magic PSG). Payne’s shot looked like it fooled the keeper and was heading inside the post, but it nicked the bottom of the crossbar and bounced out.

Danilo Acosta tried his luck at goal with a shot in the 87th minute as he was on the end of a failed clearance after a set piece. The sliding shot did not have enough joice to find the back of the net though.

LA Galaxy II put the game to rest late when Jaime Villarreal hit a magnificent free kick from 30 yards out that nestled into the back of the net.

Ultimately, the speed of play and the physicality of the professional players helped LA Galaxy II earn the result against the youth national team, which struggled to find a rhythm in the first half but put together a better effort in the second half.