Meeting Brandi Chastain is never a bad way to start a recruiting visit – or any visit, for that matter.

So when Jenna Roering got some quality time with the U.S. Women’s Soccer legend, and wife of Santa Clara coach Jerry Smith, it naturally gave her a favorable impression of the Broncos’ program.

But that was only the beginning. Roering soon had an “it’s a small world” moment, discovering that one of her hosts on the trip – Santa Clara defender Sofia Huerta -  was actually an acquaintance of Roering’s BFF (best friend forever). From that point on, she was all in. 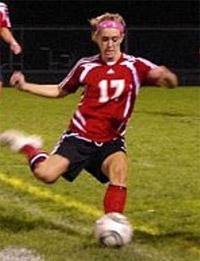 “It was another sign I needed to know (Santa Clara) was the right choice,” Roering said. “I committed two days later.”

And with that, the Broncos lured the 2013 striker who stars for her Minnesota Thunder ECNL squad. Roering brings goal-scoring to the table, but more than that she oozes passion.

This is a player who, on days off from her club, often trains with her brother’s team and conditions at home. And when she returns home her mind never strays far from the sign that hangs over her bed – the one that’s been there since she was 12 – reminding her that every day is an opportunity to become a better player.

Roering seized such an opportunity last fall when she was invited to the U.S. U18 National Camp in Carson, California. She says she can’t wait to get back, but quite honestly she’d probably say that about any soccer gathering.

“Soccer is my life,” Roering said. “I know what I need to do to take my game to the next level, and I continue to focus on that.”

While always keeping an eye out for the signs.

Reid is ever the globe-trotter these days as she makes the rounds with the U.S. U17 squad after being named to the CONCACAF U17 Women’s World Cup Qualifying roster. She also spent time in Germany last year with her regional squad.

Megan Burke (CFC United) has verbally committed to Massachusetts for the 2013 season.

Emily Harris (Stars of Mass) has verbally committed to Villanova for the 2014 season. Harris is a goalkeeper and state champion and said of her decision: “I’m very excited to have the opportunity to not only play soccer at the highest level but do so at such a great academic institution. Go Wildcats!”

Emily Byorth (Ohio Premier) has verbally committed to Clemson for the 2013 season.