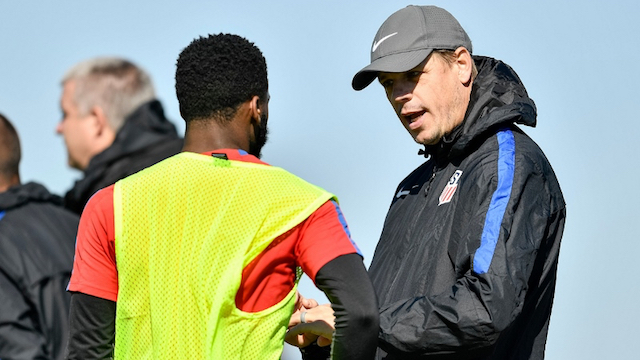 The U.S. Under-19 Men’s National Team will travel to Trnava, Slovakia from May 1-12 to participate in 2018 Slovakia Cup. The U.S. has been drawn into Group B with Czech Republic, Kazakhstan and Ukraine, while Azerbaijan, Hungary, Slovakia and Wales make up Group A. All teams will face a fourth opponent in the placement stage, but only the two group winners will vie for Slovakia Cup Champions.

The U-19 MNT’s most recent trip to the Slovakia Cup was a Championship run in 2016. After victories over Georgia and Ukraine in the group stage, the U.S. went on to defeat Russia 2-1 in the final. That squad featured future MNT player Weston McKennie as well as 2017 CONCACAF U-20 Champions Luca de la Torre and Marlon Fossey.

This tournament will mark just the second gathering for the U-19 MNT during the 2018-19 player cycle, and second under the helm of Dave van den Bergh, who transitions to the U-19 head coaching role after serving as the U-15 Boys’ National Team head coach since February of 2016.

Van den Bergh has called up 20 players for the series of international tests, 19 of whom were born in 2000 (the birth year for this age group of U-19s). The only 2001-born player on the roster is midfielder Taylor Booth (Unattached).

Booth, Reyes and Sands are joined by Blaine Ferri (Solar Soccer Club), Justin Garces (Atlanta United FC), Chris Gloster (Hannover 96) and Akil Watts (Unattached) as veterans of the 2017 U-17 World Cup in India. Zyen Jones (FC Schalke 04) was part of the 2017 Concacaf U-17 Championship squad that qualified the USA to India.

All the players on this roster are age-eligible for the team that will attempt to qualify for the 2019 FIFA U-20 World Cup to be held in Poland. The age cut-off for that World Cup is players born on or after January 1, 1999.